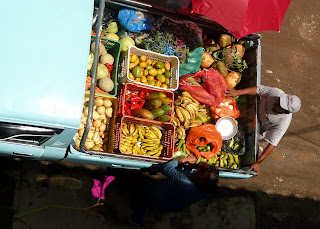 This is a pic of V negotiating with our local mobile greengrocer who parks right outside our house every Monday with a wide selection of fruit and veg.

It's fun to buy from vendors like these rather than the sterile supermarkets of the capital. There's an old guy who passes every Monday with shark steaks and another with a more irregular itinerary who knocks on doors to sell his freshly made cheese. Today la señora de las tamales is due around 5pm.

San Pedro el Panorama, our little township on the outskirts of La Antigua, is for me at least a very satisfying place to live, largely because of the way it retains many of the characteristics of a proper Guatemalan community. All the classes are represented and there are several local shops, a basketball court, a church, a cantina...even a Chinese Takeaway.

Most importantly of all there is a woman called Mari at the end of our street who makes tortillas every morning. The pleasure of Guatemalan tortillas - fresh off the comal - is usually rather hard to explain to anyone unfamiliar with Mesoamerican culture.

There are two walled and gated communities alongside Panorama, the Alameda Santa Margarita and Bosques de Antigua. A decade ago I looked into the possibility of acquiring a plot in the latter when it was little more than a not-so-densely-packed wood of pines cris-crossed by narrow cobbled streets. Since then it has started to fill up with the fantasy colonial homes of capitalinos. It's one thing if you come once every several weekends, but I for one couldn't take having to effectively ask permission to come and go on a daily basis from one's own development.

A few hundred metres up the road Panorama segues into Jardines de Antigua a bizarre suburb of unimaginative chalet-style homes that has acquired ideas above its station since ex-Presidente Arzu set up home here and populated the trees of his enormous garden with magnificent scarlet macaws.

It's not quite a gated community, but its residents, many of them foreigners it seems, appear to act as if it were. I have to say that I tend to respond with equal amounts of amusement and annoy-ment to those who insist on re-creating their own little Alpine refuge in the midst of the effervescent disorder of Central America.

On the other side of the main road to Ciudad Vieja we have the labyrinthine San Bartolo, which V has lately resorted to calling San Bar-Cholo. It certainly doesn't feel quite as safe as Panorama whenever we walk the dogs there.
Posted by Inner Diablog at 9:00 pm

So, are you up for ceviche, beers and blogs?

man, you are making me celoso.

Mi suegra is here, down from the mountain near San Jose Pinula, and is cooking up a storm...including fresh tortillas daily, good chirmoles, pepian, doblados...a moveable feast!