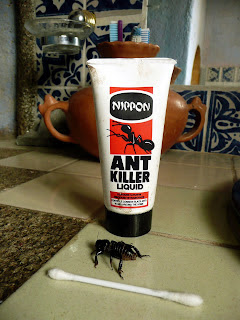 We found this oversize ant-like insect, known locally as a chucho, drowned in the dogs' water bowl.

Most of the other buzzy-bitey things around the house are being dealt with using RAID Extra: "So good, you see them die," it says on the can.

Not seen any more of those intensely scary spiders whose two front legs have been re-purposed into lobster-like pincers. (On the subject of which I was somewhat scandalised to hear this afternoon that my mother dined last night on lobsters that had been brought back alive from Barcelona by my aunt's housekeeper - wrapped in tin foil in her suitcase!)

Not much else of note to report here.The weather has perked up and the football is under way. The local news is much the same: there's a big financial scandal in the Congress as one of the senior officials appears to have gone walkies with Q80m (approx $10.5m) and the levels of random violence in the capital are as scary as ever. Yesterday's toll was ten dead.
Posted by Inner Diablog at 9:42 pm