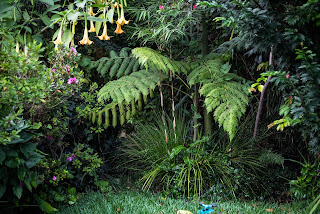 Behind the cyathea here, you can just glimpse the trunks of our Chechén and Chacá saplings.

There’s a ancient Mayan legend about these trees, always found together, one with a toxic black sap, the other with a brown bark that serves as the antidote.

Kinic and Tizic were brave, warrior brothers, both of whom had a thing for the beautiful Nicté-Ha. Kind hearted Kinic’s motives were honourable. Tizic, let’s say, was a bit of a wrong’un. Their duel ended in a deadly draw. The Gods subsequently decided that they should be reborn as this forever affiliated dyad of the Mayan forest.

I am not sure how they arrived in our garden, but I went through a phase a few years ago of collecting seeds during trips around the Yucatán. Poor Nicté-Ha came back as a species of white lily, which we have yet to acquire. The bamboo is irrepressible.

Posted by Inner Diablog at 7:27 pm