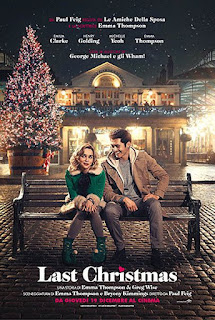 Last Christmas's big box-office hit was resoundingly declared a turkey by leading critics on both sides of the pond, but I honestly can't see what there is here to get all scroogey about.

Many have bellyached about the 'twist'. Over at the Telegraph Robbie Collin says it 'lands on your head like a grand piano'.

FFS, this movie is quoting sources like Fleabag and Sixth Sense in the way that Scary Movie parodied Scream. The payoff is not meant to be a twist at all. This is a Christmas movie, designed for repeat viewing, and its writers (Emma Thompson, her partner Greg Wise and Byrony Kimmings) are rather obviously aware that the majority of times it will be viewed, the audience will absolutely know what's going on. Anyway, if you don't twig within minutes of Henry Golding's first appearance, then there is something seriously wrong with you.

Peter Bradshaw at the Guardian labelled it 'a grisly sub-Richard Curtis festive pudding'. Yet when it comes to Richard Curtis, the subber the better as far as I am concerned. Curtis's version of London, rather like Woody Allen's, is not one I recognise; in short, utterly irritating.

Sure, Emma Thompson's London is more than a bit liberal elitey, but then so am I, and it is packed with little details that resonate. It feels real where it needs to be, and yet utterly absurd as the genre demands as well.

There are loads of cultural references that worked for me: those little, hidden spaces, the benches with memorials, red buses in Regent's Street, the Docklands, Inigo Jones's 'piazza' in Covent Garden, which I have seen transformed since I first walked around its boarded-up colonnades in '79, and which went on to become one of the key recreation zones of my adolescence.

But most of all, that song, one of the saddest festive ditties ever composed, and which at the close of 1984, established itself as the lifelong soundtrack to my recollections of a particularly melancholic phase of my existence.

Its title, borrowed by the film, refers to at least three things here. One of them, the passing of its writer on Christmas Day 2016 is implicit in the 2017 setting I would suggest. George himself had proposed the idea of a screenplay scored with his music and had given Thompson and co permission to go ahead before his untimely death. I don't think it's a stretch, given some of the content and the release date, that we are also being asked to contemplate the mood of the final British Chrimbo before Brexit.

And I think that overall, the movie earns its finale where Emilia Clarke is allowed to perform a surprisingly upbeat cover version of Last Christmas.

Yet Mark Kermode went on air to complain that the whole sorry spectacle is grounded in a misinterpretation of George Michael's lyrics, which is one of the more misplaced criticisms one could possibly lay down about this movie.

What is is definitely grounded in is gentle yet sophisticated British humour. so while I can see why American critics* might not appreciate this, it's a little bizarre that it fell so flat with our own.

Can one really imagine that Emma Thompson, MA hons Cantab, doesn't realise that Michelle Yeoh's shop in Covent Garden market, packed to the rafters with Christmas tat, all year round, is an essentially silly idea? It's a JOKE. As are the fact that Tom 'works nights' and Katarina's mother's quip that Brexit should be blamed on the Poles.

My feeling is that this grinchiness possibly reveals something about the way critics consume their films, in sessions of three or four in one go. Back in the early noughties we used to do this at a cinema in east London. And we found that the mood of one movie could readily bleed into its successor, so that one could struggle to adapt to the quiet sensibility of a piece preceded by another with a high body count.

If you've just sat through a whizz-bang episode of Star Wars some of the poignant details of London life captured here might just pass you by. In this respect the moment where the writing and performance peak in Last Christmas occurs where Kate and Tom converse, sitting on the floor of his flat. There's something just a little bit moving about that scene and that location, which transcends the colourful campness all around it.

This isn't a one star movie; it has merits enough to deserve three, and we gave it an extra half star, just because it touched us as it amused us.

PS: One of the best ways to witness Covent Garden in its previous existence as a fruit and veg and flower market before the transformation into cultural centre by the GLC, is a viewing of Alfred Hitchcock's Frenzy (1972).

* David Fear, Rolling Stone magazine > Last Christmas is bad. Incredibly, shockingly, monumentally bad. The kind of bad that falls somewhere between finding a lump of coal in your stocking and discovering one painfully lodged in your rectum.