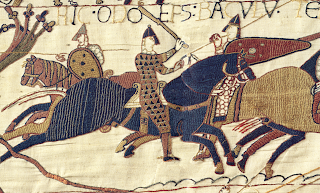 Here on the charge at Hastings is Odo of Bayeux, the man who commissioned the tapestry.

Brother to William and a bishop. Even in 1066 this was fairly outré behaviour for a member of the secular clergy.

Yet being a respected man of the cloth, Odo apparently paid heed to the technicality that he was not permitted to draw blood and thus eschewed the pointier sort of weapon in favour of those designed to deliver blunt trauma.

In effect, a baseball bat. It has always amused me that in public at least the Guatemalan legal system is geared up to resolve disputes through a process of reconciliation, yet almost every lawyer I have ever had here has privately opined that the best way to handle matters is in the manner of Odo above.

Post-conquest Odo ended up owning Kent, which is where he recruited seamstresses to produce this monumental piece of medieval propaganda.

After a spell in the nick, he later set off on the first crusade, died en-route and was laid to rest within the cathedral of Palermo.

Posted by Inner Diablog at 6:03 pm

yet almost every lawyer I have ever had here has privately opined that the best way to handle matters is in the manner of Odo above.
I'm not a big fan of going to the law because it tends to be a matter of who has the deepest pockets. The law seldom is in play.