Now that we’ve watched The Trial of Christine Keeler all the way through to the satisfying wrap up of episode six, there are a handful of additional conclusions to make.

We live in an era that would dearly like to paint Keeler as a victim, yet as the text before the end credits informed us, that’s not how she wanted it to be.

Amanda Coe has taken this as her cue to deliver carefully ambiguous characters across the board. It gets a bit cake and eat it at times, but her sympathetic approach to the likes of Profumo, Mandy Rice Davies and so on propels the drama even where the surrounding dialogue is a bit on the nose.

The only obvious villains here are the police, who are all rather ACAB. (Though the C in the acronym could also stand for cabinet ministers.)

Hypocrites make up a large-ish subset of the overall population of abusers. The Catholic church alone is a strong indicator of this. Yet what about self-styled non-hypocrites, such as Stephen Ward? One might take licentiousness to the point of righteousness, i.e. hypocrisy. 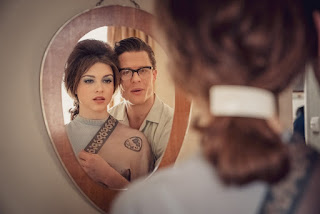 My father’s friendship with Ward has led to speculation within the family that perhaps we should have interrogated him a bit more about the girls living in Wimpole Mews. Now that I have watched this series (and simultaneously re-acquainted myself with John Hurt as the ‘not a real doctor’ in Scandal) I feel it is really about Ward that I should have shown greater interest.

One of the frustrations of both the new series and the 1989 feature film is that the tale of Jack Profumo’s adultery is quite tame by the standards of modern politicians. At the time the Cold War made it a tad more interesting, yet Ivanov is very much a secondary figure in both adaptations. 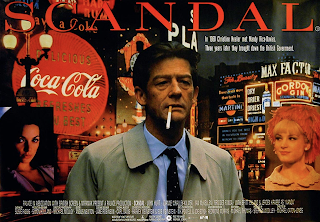 The truth is surely that the real scandal is going on in the background. We get one scene of debauchery at Cliveden and facts emerge in court which have apparently not deserved a scene of their own beforehand, which gets a little frustrating. I plan on reading one of the two books that concentrate on Ward and his ‘secret world’ to fill in some of these gaps.

The full story about the scapegoat of the incident will be stuck in the archives until 2046 apparently, when I could conceivably still be around to read about it. One presumes that the Duke of Edinburgh will almost certainly not be.

Keeler herself is perhaps not as interesting a character as the tabloids of the time would have had us believe. Many modern Latin Americans would certainly crack up at the fine distinction being made here between real pimps and tarts and the likes of Ward and his girlfriends.

(Almost) lastly, there’s clearly only one café in the whole of early 60s London and it’s called The Regent. (The boards outside reminded V how much she used to like ‘scampi’ in London's pubs.)

Posted by Inner Diablog at 6:13 pm