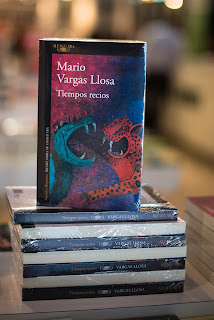 Roughly midway through and I'm still feeling like one of the blind men touching up the elephant. What exactly do we have here?

I'd have to liken it to one of those grand old stadium bands coming out on stage not really knowing if they are going to concentrate on their new material or just bang out all the familiar crowd-pleasers. And then end up doing something akin to a mad, mashed-up medley of both kinds of sets.

In his pomp Vargas Llosa was a master at building an engrossing tale on the back of alternating narratives, often stylistically at variance. Yet here such differentiation occasionally manifests itself within the same chapter.

On more than one occasion I've been left to ponder whether the octogenarian Nobel Laureate reached his writing desk some mornings not quite remembering what sort of book he'd been working on. Fiction, non-fiction, political thriller, soapy family drama and so on.

Important historical personages are introduced to the drama in ways that are thoroughly un-dramatic, more or less as static placeholders for their internal exposition.

And although the novel is ostensibly set primarily in Guatemala during the 1950s, Vargas Llosa barely devotes a sentence to giving the reader a palpable sense of time and place.

So, although I'd still hold back from calling it a dog's dinner, and it is far from turgid, I'm not yet seeing the big picture. (TBC)

Hi everyone, I am Mark Milley and I am so happy to return to this great forum to testify to the help I received from Williams David. I was in desperate need of a loan in another to be free of debt and financial slavery that had been entrusted to me by my ex-wife. It was really bad that I have to ask for help from friends, family and even my bank, but on one of them it could help me because my credit score was really bad. So I was browsing on my computer and saw some testimonials from people that David William helped with a loan, then I decided to contact him on his email {Personalloanesay@gmail.com}, so I got an email from them and I did everything He asked me. To my surprise, they transferred the loan I requested to my account and now I am so happy to cancel my debt and I have also started a business with the remaining amount to take care of me and my family. If you need a loan, contact the best loan lender of all time David Williams in his email: {Personalloanesay@gmail.com}