Readers may recall that I was struggling to see the elephant. Well, very soon afterwards it definitely manifested itself and turned out to be a bit of a mammoth. A very fine beast indeed. 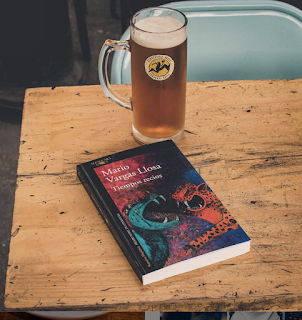 Some of my earlier reservations remain, such as the uncommon menagerie of styles, especially in the opening 150 pages or so.

I went in blind with a sense that this would be a novel set around Guatemala's 1954 coup, notoriously cooked up by the CIA. We definitely get there in the end, though these passages were the most textbook-like and Vargas Llosa had meanwhile digressed in several directions around the timeline.

At the heart of the novel is a kind of alternative history of the aftermath of the American intervention, specifically a take on the circumstances of the assassination of President Carlos Castillo Armas in July 1957, which is not the account you'll find on Wikipedia. 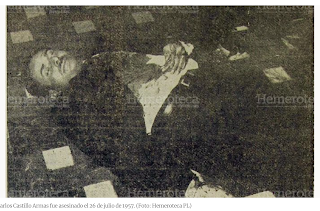 He says the idea was suggested to him over a meal in the Dominican Republic three years ago by an old friend, the poet-journalist Tony Raful, to whom this book has been dedicated. One of those dinner parties, he adds, that one ought not to attend.

Let's just bear in mind that Vargas Llosa gave public support to the least credible of the conspiracy theories surrounding the murder of Bishop Gerardi here in 1998 (the one peddled by Arzú), but the idea of Trujillista involvement in the magnicidio has been around for some time and Raful has written his own book on the subject.

The conceit allows Vargas Llosa to re-animate a personage from La Fiesta del Chivo (2000), Trujillo's fix it and fix them man, Johnny Abbés García, a key player in what was arguably the Peruvian's last great novel. He's been phoning it in recently, but not here.

Abbés García is one of a handful of key protagonists in this book, none of whom, it must be said, are particularly nice people, yet are nevertheless treated fairly compassionately by the author.

In between their personalised trajectories we get chapters that read like a history book. As if Spielberg suddenly switched to a History Channel-style documentary midway through Saving Private Ryan.

But on balance this doesn't bother me all that much, as I recognise that a non-fiction release about the fate of Castillo Armas would be read by almost nobody, while this first edition in Spanish of Tiempos Recios has a run of 180,000 copies.

And it is interesting, with a writer who has worked hard to separate out his roles as Nobel Prize-winning purveyor of literature and as right-of-centre political hack, to see him consciously serve up a hybrid such as this. ('Investigo para mentir con conocimiento de causa'.)

In the final chapters he switches into first person mode and describes an interview with one of the individuals he has fictionalised, Marta Borrero Parra, aka Miss Guatemala, who duly suggests a different version of some of the events in the earlier narrative. 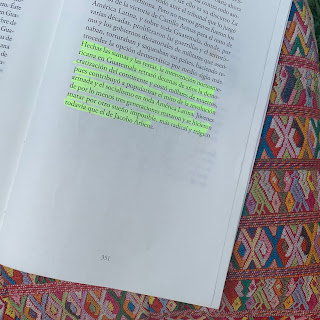 The last paragraph (above) summarises a heartfelt position that I am completely on board with — that the US sponsored 'liberationist' invasion of Guatemala in 1954 was the punto de inflexión, e.g. the moment the path forked in the 20th century history of Latin America.

Thereafter the only ways forward were those of extreme left and extreme right and decades of debilitating conflict. And the template for US policy, on this continent and elsewhere, had been set.

Vargas Llosa notes how Ernesto 'Che' Guevara was in Guatemala City at the time selling encyclopedias and had to take refuge in the Argie embassy. I myself recall the quotation on the side of El Comandante's tomb in Santa Clara, Cuba, which specifically identifies the fall of Árbenz as the moment which radicalised him.


He goes on to assert that the Cuban revolution would not have taken the form it did, had not Fidel witnessed how the gringos behaved towards Guatemala's democratic, modernising government.

This is all largely true, yet my reading of Guevara's biography is that he had already formed an opinion on American involvement in the region, specifically by comparing the reformist governments of Guatemala and Costa Rica, and anyone who has read The Motorcycle Diaries will know that his political formation stretched back even further.

Nevertheless, not only is the Guatemala coup a precursor to later events in the Caribbean, it is more significant than the deposition and murder of Allende in Chile, for the latter really was a bit of a commie whose ideas of economic reform were not unlike those of Maduro in contemporary Venezuela. And Pinochet was not an outsider leading an invading army of foreign-funded mercenaries like Castillo Armas.

No, the horror of what the Yanks did in 1954 is that it crushed a genuine if ultimately naïve attempt to lift Guatemala out of feudal torpor and lay the foundations of a modern social-democratic state.

Árbenz tended to admire Taiwan over the People's Republic and yet fell victim to a concerted defamation campaign conceived in the offices of a New York PR company that sought to finger him as a Soviet stooge. And all so that United Fruit might continue occupying land it didn't use and avoid paying a centavo in taxes.

Anyone with an interest in this country and the history of the region should give this novel a go.