I've been digesting this movie for several days now, wondering how, if at all, I can describe it. 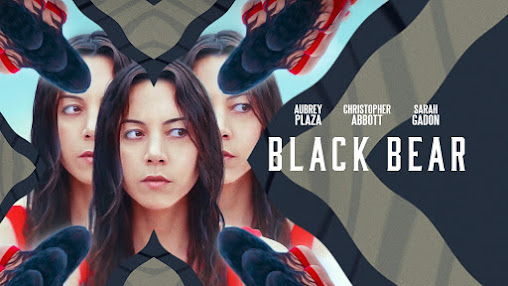 It has a central characteristic the mere description of which is something of a spoiler. There's almost no getting around that, so here goes.

Two stories are told, linked by location and theme, by character too, though not so closely, and roles have shuffled.

Reviewers will tend to mention two separate realities, uncertainly related, yet the whole only really makes any sense to me if one acknowledges a third, observable as a sort of interstitial.

It seems that director Lawrence Michael Levine (and his wife Sophia Takal) like to write and direct movies about situations that occur in the lives of creative people such as themselves. This accounts for possibly the only aspect of Black Bear which I didn't lap up quite so enthusiastically — the focus on concerns that felt less than universal.

In this sense the first of the pair of stories worked better for me as the situation is simpler, the dark humour of the dialogue more penetrating, and the mood and music frame the action almost as a classic psychological/wilderness thriller in ways that at least partially wash over and dilute the New York navel gazing inherent in the dense, almost play-like script.

Anyway, they kind of had me with Aubrey Plaza. I'm sure I'd watch her in almost anything. And although she undoubtedly delivers a powerful performance in the second section, it's her her naturally deadpan, 'unreadable' persona that really sets the film up in the first.

There she plays Allison, actor turned Indie director, who is seeking creative replenishment in a log cabin beside an isolated Upstate lake. Said cabin sits beside the equally wooden home of Gabe and his pregnant girlfriend Blair, and Allison's arrangement here appears to involve more direct engagement with her hosts than is perhaps usual in most Airbnb stays. Her presence is, to say the least, destabilising.

But Blair and Gabe are already primed with issues. Perhaps my favourite scene in the film is the one where the couple take turns to make statements about their lives and interests over dinner with their new guest, which the other immediately contradicts, feeding an atmosphere of palpable awkwardness.

The second story is more explicitly about a film-makers' creative process, about manipulations, explicit and implicit, and the unstable trio of Allison, Blair and Gabe are back in partially switched positions.

Plaza says Levine wrote Black Bear 'for' her, and sold the script to her as an exploration of discussions the pair had had earlier about their experience of working with partners in the movie industry. Plaza is in a long-term relationship with Jeff Baena, who directed her in The Little Hours.

Posted by Inner Diablog at 4:00 pm