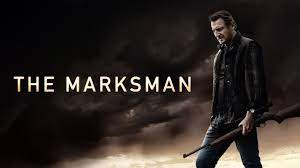 Somebody had to have sat down with the thought 'how can we tell a story about the southern border which will satisfy both Democrats and Republicans?' I kid you not.

Both worldviews are present here and somehow manage to avoid doing the whole matter/anti-matter thing for 108 minutes.

So, another year, another Liam Neeson 'action' flick with slightly more constrained ambition and budgets. There was another one last year. I can barely remember it, except that it wasn't very good.

Yet still there is something oddly compelling about Neeson coming out once again to do his schtick. The whole thing is utterly absurd, yet it isn't clear whether his presence makes it more so or just bearably so.

And the movie also features the ever lovely Oaxaqueña Teresa Ruiz; briefly. (Spoiler).

Frankly I might have preferred the experience overall if Miguel's journey had ended just beyond the border fence and Jim had instead had to transport his mother up to the Windy City. But...it was not to be.

There's another all very predictably done in dog, plus a fairly gratuitously negative outcome for a likeable gas station clerk. The highway patrolman had it coming.

Posted by Inner Diablog at 4:42 pm