I have grown rather tired of YA dystopias.

I rather preferred the ones I grew up with, like Logan's Run. The flick and then the TV series had a basic, just about believable premise. I then found the source material, the novels by William F. Nolan, which turned out to be a little more adult than I had bargained for.

Chaos Walking has reportedly been sitting around in pieces in the editing suite and now that it has finally been assembled the parts don't seem to fit together all that well.

There's a couple of basic premises at the start — a distant space colony where there are no women and the men can hear each other's thoughts (the noise) — which turn out to have less importance to the developing plot than one might have anticipated at the outset.

I suppose the thing that really turned me off was a gratuitous scene of dog murder at around the two thirds mark. It's the only piece of nastiness in this story that isn't somehow watered down for the under 20s. 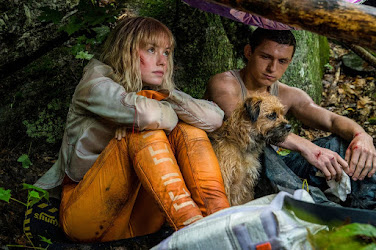 Can we take the mood of incompleteness (insufficiency really) to mean there are sequels in the pipeline? And if so, did Daisy Ridley really have to rope her post-Star Wars career to another franchise?

Posted by Inner Diablog at 4:32 am