Anthony is entering the twilight zone, though not the one where the subject's reality is being reordered cryptically from without, but the more devastating one where the disarrangement comes from within. 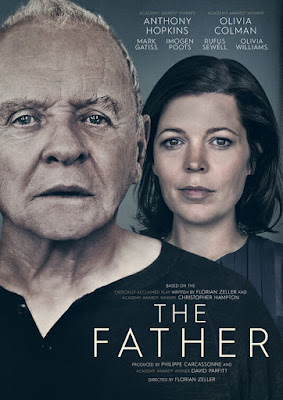 For anyone, like myself, who has witnessed an older relative or friend embark on this journey, The Father is going to make for rather tough viewing, in the end at least. (The recurrently missing watch rang a lot of bells.)

Florian Zeller cinematises his award-winning French play and, as adaptations from the stage go, this one works pretty well — though I suspect that the literalisation of Anthony's confused perceptions of time and space must have seemed less like trickery in a theatre, or at least more akin to the more native mood of outright artifice that one typically finds there.

Nevertheless, without eventually cheapening his subject matter, Zeller carefully plays with the tropes of mid-twentieth century paranoia just enough to make the first half of this film feel almost like a mystery-thriller.

The unanointed king of the cosmic gaslighting misgiving in that era was of course Phillip K. Dick. His stories are packed with protagonists who are either the only one who does or indeed does not know what is really going on.

Dick was to describe how a seemingly trivial domestic incident set him on this narrative path. He had reached out to pull a cord for the bathroom light and found it wasn't there. It had never been there, only the switch on the wall.

Shortly afterwards he crafted a short story in which a man goes into work every day only to find that the contents of his office are being subtly reorganised in his absence by a mysterious government agency.

In another tale his hero is one of many people unknowingly living within a simulation of 50s America set up by a future civilisation, and this man slowly begins to twig.

Dick, himself beset with psychiatrists throughout his life, seemingly revelled in portraying the shrink here as just another dupe, vainly trying to pathologise the grand conspiracy encompassing his own existence.

In The Father, Anthony's declining faculties remain acutely aware that something just isn't right. It's not just time that is out of joint, but space as well. The identities and dispositions of the individuals closest to him fluctuate alarmingly, as do the content, location and layout of his flat. And is it really his flat?

My wife is the sort of person who can immediately detect if a fork has changed position from one scene to the next, and so on some levels this movie was always going to intrinsically appeal to her, but Zeller must have been aware that not everyone is gifted with such acute perceptions, and so makes one or two rather big adjustments in Anthony's environment and entourage quite early on, as if to make his conceit broadly obvious to the mainstream.

For me the only downside of this decision was that the subsequently subtler recompositions of the old man's reality fall a little short of maintaining the mood of gathering tension. And yet this is ultimately not that important for it is Hopkins's extraordinary performance which takes over as the driving force, leading us towards a conclusion that is as mournful as it is ineluctable.

He is supported by the kind of cast that nearly always signals that the movie one is about to watch is going to be truly exceptional.

Posted by Inner Diablog at 3:26 pm