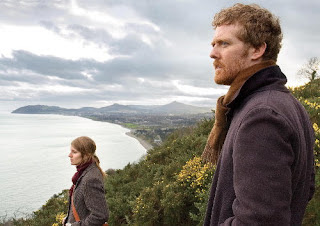 Every bit as tuneful, funny and poignant and as I expected it to be, but also somehow borderline annoying.

It just felt a little bit smug about its Sunday afternoon scruffiness, about its amateurish camerawork, about its awkwardly unconsummated romance between 'Guy' and 'Girl'.

The performance from the 17-year old Markéta Irglová is impressive, but I couldn't help wondering whether a more experienced professional actress would have left me with a better idea why such an otherwise forthright individual would keep veering away from snatching up this one chance to get it on "with the right person". Did she not fancy him? Or did she have other hanky panky issues? You just couldn't tell.

Still, I wish I hadn't known in advance that their friendship would remain platonic (at least for the duration of the on-screen action). Kermode's interview with the leads spoiled that part of the concept for me.

The songs have been composed to order, the better of them by The Frames lead-singer Glen Hansard, who plays the lonely busker. Some seem to go on a bit longer than strictly necessary, but I can see why several critics have been impressed with the way writer-director John Carneyhas made them integral to the story. Indeed, without them Once would seem a bit too much like real life!

Still, a great little indie-flick; I can see why it won the audience award at Sundance.
Posted by Inner Diablog at 11:08 pm

We saw it recently and really enjoyed it too. It had a few annoying moments but in general was so much better than current Hollywood mega-bucks fare that they are easily overlooked.