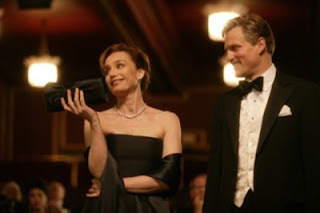 Perez Hilton was moaning the other day that there haven't been any good gay male leads since Brokeback Mountain. Doesn't this count? (OK, it was largely filmed on the Isle of Man.)

To like this movie I think you have to be able to appreciate the rather unexpected dignity of the character that Woody Harrelson plays.

Like all the other protagonists in Paul Schrader's movies (Taxi Driver, American Gigolo, Light Sleeper) it features what he describes as a 'night worker'.

Carter Page III spends his evenings as an escort for the Washington wives of permanently absent congressmen. "I'm not naive, I'm superficial," he boasts early on. Yet we learn that this character, based in part on Vidal and Capote, has leaned to superficiality as a response to the fraudulence bordering on evil that he has detected in his immediate family background and in the world he inhabits as a well-informed hanger on.

Carter Pages I and II were men that commerced in slaves, tobacco and votes. His father might have been judged a high-achiever by his peers in high-end politics, but he was, according to Carter, a 'crook', the kind of man whose rejection of his homosexual son could be repaid with a complex if incomplete rejection of his own.

In addition to Harrelson, the female cast which includes Lauren Bacall, Kristin Scott Thomas and Lily Tomlin is superb. What Schrader's film gives us is not only the standard Hollywood take on DC dastardliness, but the extra level of the displaced other-halves, and then there's Carter Page, the outsider at the canasta table, struggling to belong and not belong in his own remunerative way.

The plot ultimately revolves around the murder of a lobbyist which sees the walker placed under suspicion and ultimately abandoned by his clientele. "Never stand between your friend and a firing squad," Lauren Bacall advises him early on before the firing squad has swiveled round to point in his direction. A true whore, Page is the most honourable individual we see in this story, the only one capable of genuinely struggling with the choice between dishonesty and disloyalty.

As a take on modern politics it reminded me somewhat of Carlos Fuentes' The Eagle's Throne.
Posted by Inner Diablog at 7:43 pm