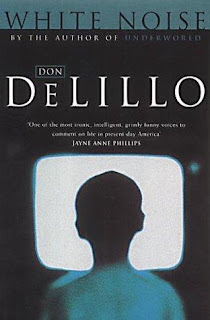 In The World According to Clarkson there's a piece in which he laments the way that certain "high-brow" authors (as opposed to the writers that he himself reads; Tom Clancy et al.) tend to waste all their beautiful prose on rather formless narratives.

Having just finished the latest offering from Phillip Roth, Clarkson quips that "It's almost as though Roth rang the publishers and asked 'How long would you like my next novel to be?' And when they said 250 pages, he said 'Oh good, I've finished'."

DeLillo does seem to wind up White Noise at the point at which he reckons he's said all he has to say...though there is a somewhat manufactured confrontation in the place of the final act.

Its central proposition, that technology and the culture of consumerism that it underpins, serves largely to fixate us with a kind of pervasive replenishment which thereby diverts our attention from the decay around and within us, is one that always resonates with me when I have recently returned from Central America.

The book takes us into the daily life of Jack Gladney, described by a colleague as "a big harmless, ageing, indistinct sort of guy." Jack is America's leading expert on all things Hitlerish. In today's world he would work for the History Channel, but as the story finds him at the dawn of the cable era, he has instead carved an academic niche for himself at a university in a provincial east coast town.

Jack has a history of marrying and divorcing women that are connected to the so-called 'intelligence community', including one who reviews new fiction for the CIA. But most importantly, Jack is afraid of death. Very afraid. During the course of the narrative his own demise becomes more directly calculable when he is exposed to a massive cloud of toxic gunk, a misadventure that occurs at around the same time that he discovers that his wife Babette shares his hidden terror to such an extent that she has prostituted herself with a pharmaceutical company executive in order to be able to participate in an illicit trial of a new drug called Dylar, said to cure the human mind of this most corrosive of anxieties.

"Terrifying data is now an industry in itself," Jack muses."Different firms compete to see how badly they can scare us." And yet fear itself, his kind of fear, doesn't seem to be news.

The best explorations of these kind of themes in the novel come whenever Jack interacts with his friend and colleague Murray, quite literally "a visiting lecturer". Together they pinpoint that the whole point of technology is that "it creates an appetite for immortality on the one hand. It threatens universal extinction on the other," and that "it's what we invented to conceal the terrible secret of our decaying bodies."

Look at any grey-haired man in London and you have to remind yourself that he wasn't always so; that all of us are in motion and it isn't, strictly speaking, forward motion. In much the same way that one notices the seasons much more when one swaps the city for the countryside, distance from the intense modernity of the First World provides more transparent access to the human life cycles in motion. Away from the constant agitation of newness, there's a more multidimensional panorama, more cruel and outrageous, and therefore more natural.

The first thing I always notice in Guate is that the under-30s and their preferences are far less dominant within the society. I think DeLillo might agree with the proposition that the ever greater extension of youth in our culture is a form of repression. In effect the market seeks to prolong the period before which people generally become 'estranged from the goods they consume'. Right, I'm off to the Apple Store...in Phoenix.

Posted by Inner Diablog at 2:09 pm