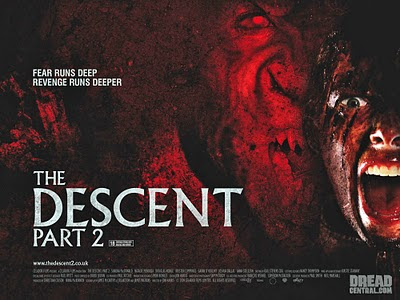 It turns out that the reason the Yanks decided to lop off the original concluding scene of The Descent (2005) was not because they are simple folk unable to handle even small doses of bleakness or ambiguity; instead their innate commercial awareness had clearly alerted them to the possibilities of milking the franchise revealed by thus butchering Neil Marshall's movie.

So now, two characters who were almost certainly dead (or at least doomed) at the end of the version I saw, are back for some more dribbly gribbly action in The Descent: Part Two. Some of what made the first film so engaging is retained — the girls get themselves into some terrifyingly claustrophobic situations. But then there's a paunchy Sherrif who mysteriously finds his own well-lit and high ceilinged path through the cave system.

It's not that bad, it's just a whole lot more formulaic, and a lot of the gore effects look a bit too shiny, rubbery and sticky.