Welcome to the wet season 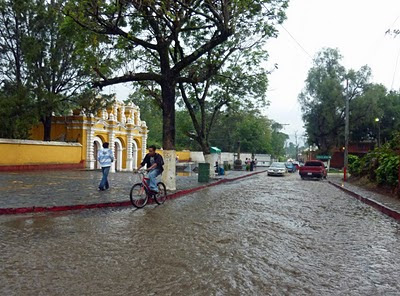 We've had smatterings of half-hearted precipitation around the same time every afternoon since Good Friday, but our frolicking in the fresh water pools of Paraiso Azul was interrupted around 4pm yesterday by the first truly torrential downpour of the new season. Well, by that and the almost inevitable bunch of late-coming stoners.

Up until then it had been such a swelteringly hot day, so that when the flash flooding around El Calvario eased, the paving stones still steamed like the early morning forest canopy around Tikal. Men were standing on the dry banks of the Pensativo awaiting the sudden gush of water from the hills which was sure to bring with it shovelable quantities of valuable arena del rio.

Perhaps coincidentally, the rough land behind our house was packed with fireflies in the night. I was beginning to wonder where they'd all got to.