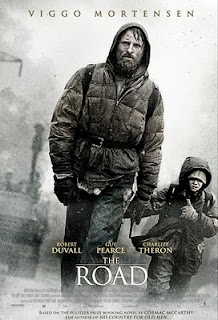 Many of the same reservations I had with Blindness almost inevitably apply here as well, though perhaps to less deleterious effect.

Take away the prose style of the author and somehow the the smothering, holocaustic pall, the allegorical intent and the central emotional burden of McCarthy's story are all displaced from a foreground into which marches a cinematic realism, which is ultimately a poor substitute.

Realism is a particularly unwelcome presence at the end of the film. Elsewhere, its intrusion can easily be illustrated: we're told this is a world shorn of all animal life, and yet a beetle and a dog soon put in an appearance. And I don't remember wondering quite so much in the novel how humanity alone could survive such a comprehensive extinction event. (I also started asking questions about the pyschology of someone who knows no other world but this destroyed one, which the screenplay had but limited answers for.)

Oddly enough the least strictly realist moments occur when Hilcoat's direction strays into horror genre territory, but these scenes feel a bit like pre-set extensions from the visual medium, which impact on the audience mood in a subtly different way to that of their textual equivalents.

There's also a sequence which can only be described as one of the most downbeat, yet somehow highly effective Coca-Cola ads in history.

Mount St Helen's and Louisiana provide the very authentically ravaged backdrops, but there are times when this post-apocalyptic landscape seems little more unpleasant than the broken down parts of the northern climes I hail from on a particularly grey December day.

Anyway, I suppose it's an irony worth reflecting on, that hard economic times tend to produce a sudden slew of works about the end of days, but the movies we really seem to revel in when times are really bad are more lighthearted. This might explain why, in spite of fine performances from all the lead players, and a more than competent showing from the director himself, this movie was ultimately overlooked when the awards season got going at the end of 2009.