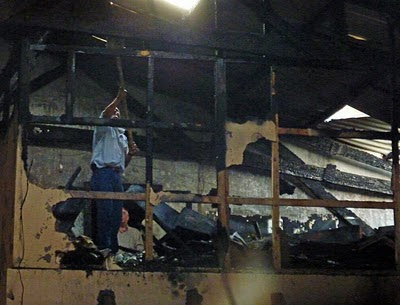 If you are that way inclined you might have paused and taken note of the one significant structure on the Calle del Arco which seems to defy Antigua's strict rules regarding the preservation of colonial style.*

V remembers when her father made use of the Gasolinera Cofiño. You'd drive in and pull up for fuel and an oil check at the rear of the building, roughly where the Maximones hang out these days.

On Sunday the building went up in flames not once, but twice. The fire started at some point in the late afternoon in the storage area on the floor above the Libreria el Pensativo, owned by Ana-Maria Cofiño, seed of a familia perhaps more famed for its fast cars than its learning.

The flames quickly traversed the wood and lamina roof to the upper level of Frida's (a pool bar) thanks in part to the kindling readily rendered by the spectacular Kaqchikel kites that hang in the Nim Po't textile centre.

The bomberos municipales arrived on scene put the fire out before nightfall and departed. Then at 9pm it started all over again.

It's been a while since we've had a full-on incendio in Antigua's tourist-traipsing core; two years in fact. Last time the victim was our friend Mik, who owns the business right next door to Frida's. As with Sunday's blaze, the blame was officially asigned to a 'corto-circuito' but Mik remains certain that he was the victim of an arson attack.

It remains to be seen whether Señora Cofiño's tenants are able to seek redress for losses incurred as a consequence of this localised calamity. Although the fire started within her own shop, news reports today suggest that the real problem may be the number of businesses sharing the same electrical installation.

Her bookshop suffered extensive damage. Many volumes were whisked to safety in a truck, but even a limited dousing with water will have a good many of them un-saleable. Antigua's bibliophiles will find the image below disheartening.

Remembering his own conflagration, Mik told us today that the worst part of the aftermath is the lingering smell of humo. Much of Nim Po't's collection of barriletes and other indigenous textiles survived the two fires, but the majority will have been impregnated with a foul tufo.

Things won't be much better in Frida's, even on the less fire-ravaged ground floor. Before the smoking ban, Mik confided, the smell of burned timbers might have been easier to mask.

* When he visited Antigua a few years ago my partner Xtofer spotted the old Cofiño petrol station and observed that Antigua was fortunate indeed, that when other cities around the world were filling their empty spaces with some of the most hideous architecture ever produced, there was insufficient local economic activity here in the 50s to merit that kind of systematic uglification. The Cofiño building and the old cinema in the parque are two exceptions that the Consejo must now tolerate. 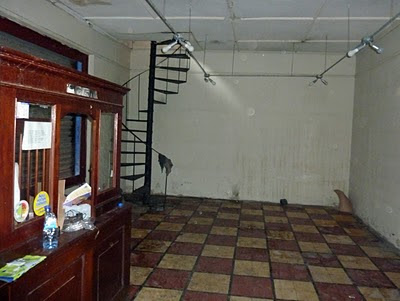 Posted by Inner Diablog at 3:09 am

What a coincidence given the owners' desire to get the tenants out asap so they can install a boutique hotel.