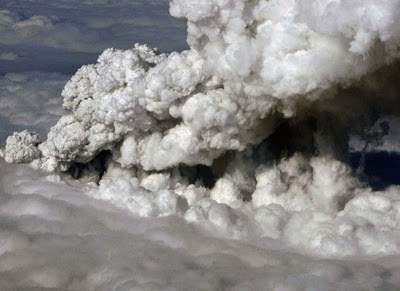 The volcano whose name* no news anchor from Shepherd's Bush to Bogotá dares to pronounce, has been causing levels of disruption previously only seen in the wettest dreams of Osama Bin Laden.

The airlines' loss is surely the environment's gain. Hoteliers and car rental firms across Eurasia have also been rubbing their hands in glee. But how long before the wider British public start to rebel because they can't find any bananas at Tesco?

Today the Royal Navy rescued 500 troops and 200 civilians from Santander. Not exactly Dunkirk, but that hasn't stopped the media making the comparison.

Scientists have rushed - some might say precipitously - to blame the persistence of this Icelandic ash cloud on global warming. The trouble, they insist, is a 'blocking event' whereby the westerly jet stream is forced to slow down by a high pressure system. Once this most important of Atlantic wind systems has started to 'meander', north easterlies rush in to fill the gap. It also doesn't help that solar activity is also 'ramping down' after 300 years at the max.

Anyway, as we approach a seventh day of closed airspaces, dissident voices from within the pool of experts would also appear to be ramping up — voices whose informed opinion more closely equates the wishful thinking of airlines losing £25m every 24 hours.

So far this highly unusual phenomenon has had the equally abnormal distinguishing feature of being nobody's fault, but that may soon change because the UK's (one can hope) outgoing administration's response to airline demands for 9-11-style compensation has been along the lines of 'ok then, fly at your own risk.'

'Volcano Exile' is a new moniker being bandied about on the airwaves, though we're as yet uncertain whether it refers to stranded passengers or to all those news reporters forced to stand pointlessly outside Europe's airports.

The BBC's Mishal Husain appears to have copped the worst deal in this respect, as her posting doesn't appear to be anywhere near an actual terminal. (In fact it looks a bit like a car park beside the A4 with a rather distant view of BA wide-bodied jets poking out of their hangars.)

She may not be anywhere near a Starbucks, but the experience does however seem to be curing her of that incessantly sleepy-eyed look of hers — back in the days when she co-fronted Breakfast she made me want to go straight back to bed.

Meanwhile, the ever irrational Fox News has been struggling to make this story relevant to their regular viewers.

Here in Guatemala we have anything up to 36 volcanoes (the Internet isn't very clear on the matter), many of them active, and indeed one of the grumpiest of all positioned directly over the southern approach to Aurora International airport.

Less disruptive perhaps, but certainly more deadly, this week our very own Pacaya claimed the lives of two members of one of those astoundingly stupid tourist groups that regularly ascend its slopes in order to brave both landslides and molten rock showers.

*All together now.... Eyjafjallajokull.

(The media seem strangely reluctant to even PRINT the name of the volcano as if the difficulty that journalists have with it has extened to their fingers.)

UPDATE: This morning the BBC's Nick Gowing was seen standing inside a jet engine (in front of the main fan)....perhaps an improvement on the rest of Frankfurt airport, but somewhat hazardous nonetheless.
Posted by Inner Diablog at 2:40 pm

Lots of pissed off Germans at La Aurora yesterday!