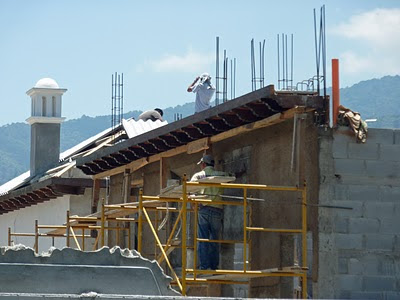 A couple of state-of-the art Guatemalan building techniques can be witnessed in this image.

Firstly there's the fake Spanish terracing along the edge of the roofline favoured by developers wanting to build cheap and sell premium.

Then there's the rather odd sequencing one often sees in speedy constructions of this sort, with one man applying the repello to an outer wall before much of the rest of the house has been completed and the electricity and plumbing fully installed.

Having said this, the developers here haven't skimped on iron reinforcements; indeed at least twice as much hierro holds up this house compared to the one with the anti-grav tubing illustrated in the previous post.

I'm starting to get a good idea about which of my neighbours I'll have to start digging for, come the next big quake.

Posted by Inner Diablog at 4:19 pm