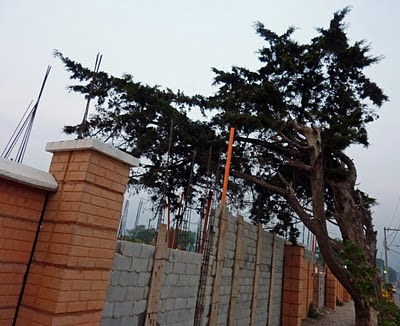 This situation on the Reformador kind of speaks for itself. Suffice to say that the developer erected a perimeter wall (fake brick: how very Guatemala City) and then found the need to disassemble those parts of it where the interior construction has been planned to back up right against it and the builders need space to fundir the support columns running through the blocks. It remains to be seen whether the wall can eventually be refitted, and whether there will be just enough of a tiny gap between it and the house for dampness, creepy crawlies etc to accumulate.

As for the tree, they are maintaining a resolute 'we'll cross that bridge when we come to it' attitude.
Posted by Inner Diablog at 2:30 pm