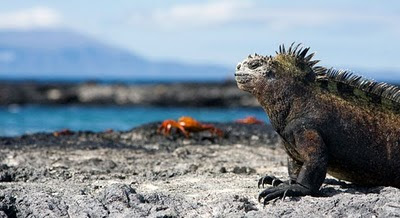 One of my best friends is currently spending his honeymoon on the Galápagos Islands, suffering a little, it has to be said, from a lack of broadband access, but otherwise content to be rubbing shoulders with giant turtles and komodo dragons, and still able to tweet about the experience.

This remote archipelago remain evolution's ground zero. 201 years after the publication of Darwin's account of what he learned there, I can only claim to have unearthed one credible argument against the actions of Natural Selection in nature. It's essentially a reasoned quibble, rather than one based on observation or experiment — and it goes like this...

Given the known tendency of certain genes to associate themselves in a relationship known as correlation, genes B and B* can be inherited together, even though only gene B is providing an advantage with respect to the environment. Gene B* is thus along for the ride and not being selected for in quite the same way as its partner, and yet nevertheless spreads through the population in a more or less identical fashion.

Now I'm sure you could murk up this neat little protest against Darwin should you choose to delve deeper into the biological complexities of the matter. (Darwin of course knew next to nothing himself about the mechanism of inheritance: genetics. )

But Jerry Fodor — the philosopher who posits this adjustment to our understanding of evolution — has, in doing so, knowingly re-opened one of the great fault-lines in western thinking: between those who favour external factors and those who favour internal ones. See for instance empricism vs rationalism, nature vs nurture, behaviourism vs well, common sense. Fodor looks at evolution as conceived by Darwin and smells a rat, because the process appears to be almost entirely driven, as he puts it, by an external factor: the environment.

Now, for a rational non-scientist (and historian to boot) such as myself, the notion that internal and external factors nearly always work in combination to produce change is close to sacrosanct. So I have to admit to some sympathy for Fodor's position, even while acknowledging that a simple intellectual prejudice may be at work here.

The LRB recently reviewed What Darwin Got Wrong — the book Fodor has co-authored with Massimo Piattelli-Palmerini — and concluded that they have had to create a caricature of contemporary Dawinian thinking in order to find several non-fatal faults within it. So when the pair state that the theory of Natural Selection "overestimates the contribution the environment makes in shaping the phenotype of a species and correspondingly underestimates the effects of endogenous variables," they themselves are underestimating the extent to which scientists include internal or endogenous variables within their modern conception of the 'environment'.

Still, for the reasons described above, I'd find it rare indeed if the most important process of change within the natural world was driven entirely by a combination of undirected variation and external environmental factors, and my suspicion is that biological science will indeed have to accommodate an increasing number of endogenous factors in the years to come.
Posted by Inner Diablog at 8:16 am

So if one lizard learns how to swim, even though none before him did, does that mean his offspring (already born, let's say), will instantly also learn how to swim? (By mere observation?).

Or will only those who are born subsequently-inheriting his post-experiential genetics-inherit this ability?

Or would it be that only those lizards that learn how to swim survive, giving rational non-scientists a sample to learn from which appears to support a certain hypothesis but in reality proves only that within an environment some survive and others do not, for reasons which said scientists may not perceive or understand?

Indeed not. Learning is a part of behaviour not genetics. I speak Spanish but would not expect my offspring to come out of the womb with an 'hola!'

Someone might have a genetic predisposition to be exceptional at maths, but that also doesn't mean that those without it can't learn to count pretty well.

I may have certain genes in my genome that might make me adapted (or maladapted) to particular environments, and if conditions favoured the likes of me dying before procreation,then those genes would statistically have a better or worse chance of becoming predominant over time in the population to which I belong.

In the case of swimming lizards...well, all early reptiles once swam (as did our own fishy ancestors) But if a certain species of lizard evolves to live on land but then faces changed conditions , over time very small physiological changes which favour survival in the wetter environment are going to lead to more lizards which thrive in the wet...up to and including the aforementioned swimming behaviour which would eventually become encoded as instinct.

Or put it another way - your way perhaps - when a given population of bacteria 'learn' to become immune to antibiotics, is God just fucking with us, or is there some observable biological process at work there?

Are the bacteria learning to become immune, or are some of the bacteria simply stronger than others, i.e., survival of the fittest?

If a man learns to take an alternate route to work to avoid traffic congestion, has he evolved? Does learning prove (or cause, promote, aid), Darwinism (or evolution)?

I presume the bacteria analogy was not meant to imply the bacteria changes its essence, but in the context of Darwinism and your invocation...well, I guess if we're looking for observable processes, is Galapagos littered with transitional fossils?

Let's stick to the bacteria because they are simple. As they reproduce their genome mutates. According to Darwin the mutations which prove advantageous will tend to survive longer. Mutation piled upon mutation will produce bacteria that are resistant to antibiotics and thus divide more.

You don't need to go around diiging up fossils to watch natural selection working as advertised on all kinds of phenoma such as the flu virus. You can practically see it happening live in a dish.

Spencer coined 'survival of the fittest' and Darwin didn't pick it up until the fifth edition of his book.

The notion that anything a creature learns in its lifetime can become part of the heredity package - 'the inheritance of acquired characteristics - is a discredited alternative explanation of evolution first put forward by Jean Baptiste-Lamarck, who like Darwin had no idea about genetics.

Anyway, the purpose of my original post was not to get into those tired arguments between science and creationism. It was to suggest that the door might still be open for part of the action of evolution to be occurring within the genome itself regardless of external conditions. If at least some of the genes being passed down from generation to generation are thriving thanks to a freeloading effect, then there may be patterns in the process that cannot be explained entirely by Darwin's model.