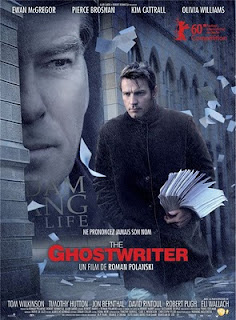 Having recently acquired a taste for a bit of dread and foreboding thanks to Ibáñez's Hierro, and with Hans Blix about to shock and awe the Iraq War enquiry in London by declaring the 2003 invasion illegal, it seemed appropriate on Monday evening to turn to Polanski's well-regarded new thriller, The Ghost Writer.

Neither of us have of late been huge fans of Ewan McGregor, especially since he got started with those vanity motorcycle treks. But here he's excellent; even the estuary accent he puts on for the role of 'the ghost' is more than 75% accurate.

Now, anybody who can't spot that this is essentially an absurdified version of the Tony Blair story, shouldn't bother paying to see Inception.

As Adam Lang, Pierce Brosnan plays a prettier, dumber, Scottisher version of the former PM (...and Olivia Williams a certainly prettier and more charismatic version of his wife Cherie.)

Having resigned in a bit more disgrace than Blair, Lang has banished himself to an isolated modernist villa on Martha's Vineyard (which his wife likens to Napoleon's exile on St Helena) in order to complete his memoirs. Unfortunately the current text is a bit of a dog's breakfast and the most recent ghost writer has mysteriously tipped himself off the side of the ferry. Enter Ewan as the unnamed 'ghost', enticed by the offer of $250,000 to get the next flight out to America to finish off the book within a month.

Now, as we all know, Polanski can't really go to Massachusetts, so the northern German and Danish coastlines have been put to use as a fair enough proxy. The receptionist at the ghost's hotel is clearly German but has been dressed up as an eighteenth century New England serving wench in order to divert our attention from the fact. The lady at the ferry terminal ticket booth however gives the game away a bit when she says 'zat vill be fawtee buckz'.

Overall, this is a very good movie, certainly not one to be consigned to the so bad it's (almost) good category, into which must go Polanski's Bitter Moon, which we recently revisited.* It is nevertheless, as the commentator's cliché goes, a game of two halves. In the first period we get a taut and rather theatrical experience rather like an Agatha Christie play, in which we are introduced to a country house full of characters and invited to be suspicious of all of them, at this stage in a fairly non-specific way. It's a testament to Polanski's talent that the mood of unease is so palpable and engaging, even when not much is happening to open the plot up.

The second half begins with a period of discovery and investigation in which the ghost becomes almost certain that his predecessor was murdered, followed by the rapidly ramping up thriller sequence, where credibility does start to get a bit strained.

Why for example, is a serving British foreign secretary able to answer a 212 area code phone at any time of day over an extended period and then able to show up in person within a couple of hours at a remote New England motel accompanied only by a lone goon who looks as if he belongs in a Jean Claude Van Damme movie? And as with Hierro, the 'twist' has rather telegraphed itself at the viewer from an earlier stage in the drama, and I can think of only a few credulous folk who will be rubbing their chins at this point and thinking "you know, there could be some truth in all this..."

* So good to see a formative Hugh Grant honing his 'steady on old boy' skills!
Posted by Inner Diablog at 4:58 pm