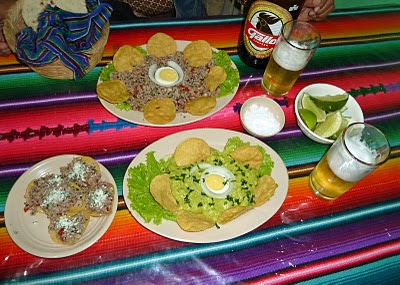 There are two places in the environs of San Bartolo's plazuela that the locals like to go on Sundays to partake of traditional Guatemalan grub. One is called Mamalita's, and the other...well, just don't.

With our appetites already somewhat blunted by the 'gastronomic' festival, we headed in that direction around one o'clock yesterday. To be honest this was already a little late, because Mamalita's is at its buzziest in the late morning (Sundays only). It's the closest thing to a local equivalent of Spain's pinxos /tapas culture — a place to have a beer and a few snacks before going home for the meal proper, typically consumed a couple of hours after what would normally be considered lunchtime.

This friendly, unsophisticated institution is perhaps best known for its enchiladas (Q10 each, eat-in), but I've never felt up to tackling one of these without a bib...or at least a tatty, desechable t-shirt. On this occasion we ordered some salpicón (shredded beef salad) and guacamol with tortillas to go with our litro of Gallo (above).

Much of the food we've been cooking this week has featured the native herb/weed chipilín. We bought a substantial quantity one afternoon at the market and spent much of the subsequent evening painstakingly stripping the leaves off the stalks. (They can leave a bitter taste.)

The last of it went into V's dish below: seared tuna in a parsley, lime and pepper sauce accompanied by pitta bread and a rice cooked in the pan with chipilín, corn, ejotes, broccoli, cauliflower, raisins and hierbabuena. She sprinkled fresh Italian parmesan over it...as she does with most things, while it lasts. A dash of smoky pimentón also went in, but only after the rice had been fried with the other ingredients. All went down well with Baltika No7. 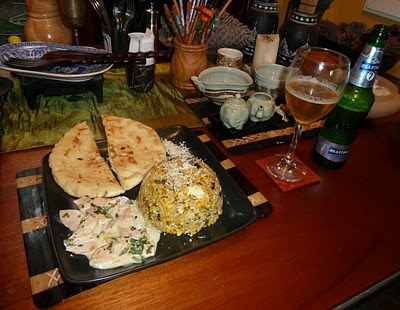 Posted by Inner Diablog at 8:37 pm

Excuse me, but if that´s how you get your lunch or dinner served at your house, I have no idea why you would even consider eating out. Except to give your wife a break. In that case, that´s very sweet of you.
Congratulations to your wife! She must be quite a hurricane in the kitchen!!