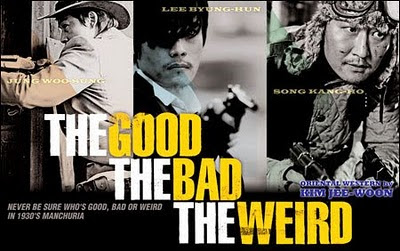 Kim ji-woon is not only one of the world's most stylish directors, he also has a great sense of fun. (There's no better illustration of this than his first feature.)

In the making of this eastern-western set in 30s Manchuria he spent more money than any of his compatriots before him and the result could best be described as a madcap spoof with occasional intermissions for more composed coolness.

The plot as such follows the corpse-littered trail of a bounty hunter, an hired assassin and a train robber as they contest the ownership of a mysterious map which may or may not mark the location of an ancient Chinese treasure. The Japanese Army, the Korean independence forces and the mounted 'ghost market gang' are also interested.

The first twenty minutes are absolutely terrific. Thereafter there are sections, particular those involving action sequences, which are a tad over-indulgent.

But no matter, Song Kang-ho, 'the weird' (last seen in Park Chan-wook's Thirst), is always such a cheering screen presence and is well complemented in this film by two more of Korea's finest screen actors, Jung Woo-sung as 'the good' and Lee Byun-hung as 'the bad'. (The latter was excellent in A Bittersweet Life and the perhaps best thing in the otherwise awful I Come with the Rain.)

Posted by Inner Diablog at 2:59 pm