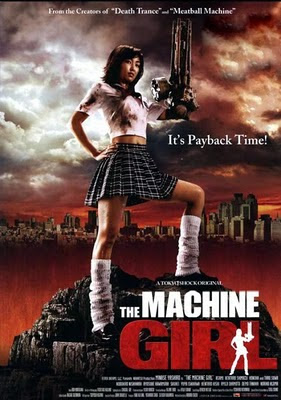 The trailer below will give you a feel for just how much blood is gushing around in this movie.

Most of it is the kind of ridiculously OTT gore that forms the essential ingredient of these low budget Japanese shockers, but there were moments when the contents of my own insides seemed to be dashing towards the exit.

Ami is just an ordinary high school girl until her brother is murdered by a gang headed up by the offspring of a particularly objectionable clan of ninjas turned yakuza. Her early attempts at revenge result in capture and the removal of her right arm. After escaping she hides out at a local mechanic's shop and it so happens that he has the skills to build her a new limb with several deadly weapons incorporated, most notably a chain gun.

The essential awfulness of such movies should never extend to the performances and the production work, as unfortunately it does here. Still, amusing enough for those with strong stomachs and a soft spot for the genre, drill bras et al.