What a difference a little lack of rain makes 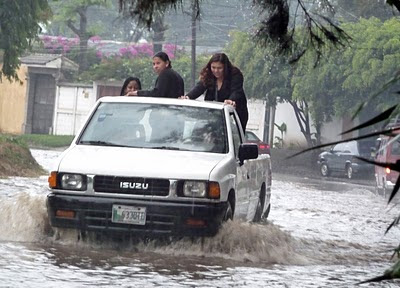 Just 48 rainless hours after this, everything is looking oddly droopy and parched again.

V was out this morning hosing down the road outside and the smell of the moss on the damp cobbles had just enough of the seaside in it to transport me back to strolls along a distant craggy coast with the tide out.

We bought five luscious pineapples for Q3 each on Tuesday, sold to us by one of half a dozen costeños who'd pulled up in a picop and then proceeded to seek out customers on both sides of our street.

Venta loca it turned out to be too. Once things had quietened down they bought themselves some chiles from the local shop and a bottle of pure water which they duly used to wash their hands and utensils. Who says there's no such thing as a regular Chapin with standards?

When offering the first pineapple, its mocho chopped and outer skin removed so that it might be held in the manner of an oversize ice lolly, the salesman had also been careful to cut a sample and hand it over to us on the blade of his knife so as not to touch a single part of the fruit.