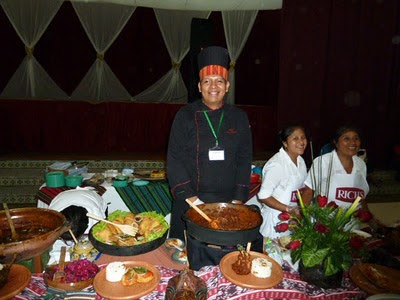 This weekend Antigua hosted a disappointingly lame gastronomic festival. V had warned me not to have a big breakfast yesterday because we'd soon be gorging ourselves on interesting Guatemalan goodies, but I already had my suspicions that it would be more enticing to people with cameras than those with plastic spoons.

We stayed about half an hour from twelve thirty until one. It had kicked off at midday and already things were getting disheveled and the cooks representing the various aldeas were apparently having difficulty keeping some of the concoctions warm in their earthenware pots.

V's expectations of discovering something unusual were not met. I can't imagine there were many people there who'd never tried a pepián or revolcado.

Given the corporate sponsorship, the prices were a bit silly frankly. In the end we paid Q20 for a rather miserly portion of pollo con crema y loroco, most of which went back home for the dog. It was essentially a boney piece of chicken covered in cream and butter with a barely perceptible aftertaste of loroco, accompanied by agglutinative white rice.

Some of the selections were very well presented, others less so. San Juan del Obispo made a superior effort it has to be said, and the chef (above) was happy to have his picture taken, unlike some of the viejas amargadas I could mention!

I sometimes despair at the quality of local 'gastronomy'. When people learn to cook here they simply learn to cook the stuff that everyone knows how to cook. A sense of what one might achieve given a little passion and creativity doesn't seem to form part of any of the courses taught here. (Indeed, one woman who had recently graduated as a 'chef' was critical of V for adding basil to her pasta once. Apparently la albahaca is for medicinal purposes only. Gnnngh.)

And it is such a pity, because given the availability of ingredients this could so easily be a gastronomic paradise. But the locals seem to revel in the rutinario, or perhaps are simply afraid to experiment, and most of the visitors don't seem to expect all that much (nor wish to pay for it.)

Anyway, as if by way of compensation we moved on to Mamalita's afterwards, where we knew we'd get some decent traditional fare. (More on that ragged little institution later.) And in the evening we much enjoyed Felipe's caldo de mariscos, which is actually a match for any old tom yam you might already be acquainted with.

So this morning I was resigned to having some serious timba trouble and to have no real idea what the root cause of it had been, but I appear to be in the clear so far (apart from the colic attack brought on by this post!) 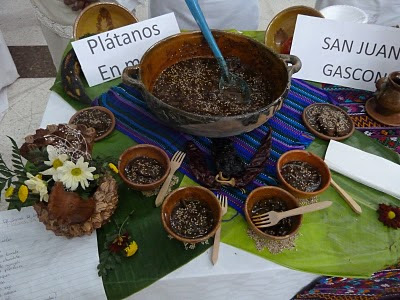 Posted by Inner Diablog at 7:44 pm

Many people think that Antigua is the culinary capital of Guatemala. It is no such thing. Granted, Antiguenos make good revolcado. The sad thing about Guatemalan food is that not only are cooks/chefs not being innovative, but they're forgetting the old dishes -- I haven't had arroz de tres capas in years, where are the old fashioned chilaquilas de guisquil, pepian de tres carnes, etc.?