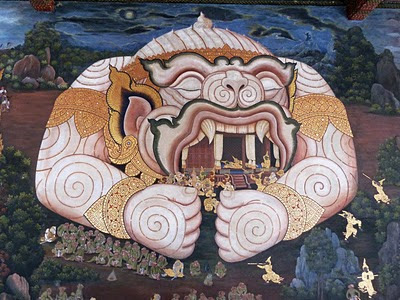 A detail from one of the 178 panels depicting the the Ramakien (Ramayana) epic in frescoes extending clockwise around the cloisters of Wat Phra Kaeo, Bangkok.

Three versions of the Ramakien survived the sacking of Ayutthaya by Burmese forces in 1767.

This Hindu tale, perhaps first written down in the fourth century BC, reached Southeast Asia via Tamil traders at the end of the first millennium.

Although Thailand's religiosity is considered part of the Theravada Buddhist tradition, the Ramayana story provided them with an bolt-on creation myth, as well as respresentations of spirits which complemented long-standing local animistic beliefs.

The basic narrative was retained, albeit transplanted to the culture and topography of Ayutthaya. Rama I (1736-1809), founder of the Chakri dynasty, supervised the composition of the most well-known Thai version, and it was during his reign that Wat Phra Kea0 was constructed.

Later on in Singapore I went to the Ramanaya Revisited exhibition at the Peranakan Museum which traced the impact of the poem's spread to Japan in the east and Iran in the west, while outlining how it was repeatedly indigenised to reflect local traditions and ethos.

The mask of Hunuman "messenger of Rama" (below) was produced in a modern workshop in Phnom Penh, Camodia around a decade ago. Hunuman is the son of the wind god and Anjana, a simian. Serving as a general in the army of the Monkey King Sugriva of Kishkindha, he becomes devoted to Rama and leaps across the sea to Lanka to help find the kidnapped Sita. 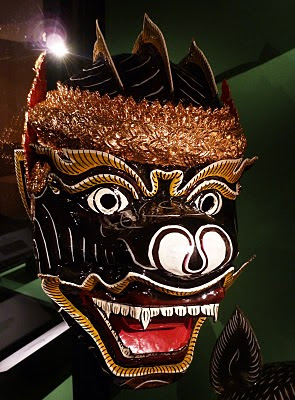 Posted by Inner Diablog at 6:46 pm