Absolutely awesome. One of those movies with two or three scenes you have to go back and watch again, multiple times. The first of these, which occurs around the twenty minute mark, took me to an enhanced level of attention that I never really came down from. (Peak Charlotte Rampling...) 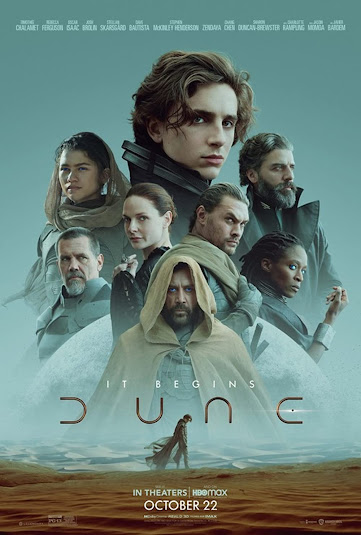 This is the work of a director in his pomp, comfortable with showing off his influences while he being strikingly singular and original. In that he now surpasses Tarantino.

Villeneuve is playing with visual references, from the likes of Star Wars, The Matrix, GOT, even Apocalypse Now, and he knows he can do it with impunity here because Frank Herbert’s 1965 novel has unimpeachable status as an antecedent.

He is perhaps also flirting with the artistic thought-crime of 'orientalism', like a man who knows he is going to get away with it, because his source did.

He even throws in a tribute to Teotihuacán. And there's a chap going down a ramp playing the bagpipes that tells you everything you need to know in an instant about what Denis is up to here.

It even has one or two decently memorable lines. Not sure if this one was lifted from Herbert or not, as I have never taken on the door-stopper...

“The mystery of life isn’t a problem to solve, but a reality to experience.”

My favourite sci-fi novel at prep-school was Foundation. Time to get bingeing!

Posted by Inner Diablog at 5:29 pm

The trick with reading the book is to keep a half dozen bookmarks at the ready, it has a great mass of made up words that really matter to the understanding of the text. I read the book for a middle school lit class-it was a very easy report to write. The book's pretty good, I'm sure you will enjoy it.

In a very shallow way I like the new paperback format/cover as seen at variou airports. Might give it a go!