How long will we be suffering the expensive creative aftershocks of Game of Thrones?

Here both the source material and the production company make for an unlikely combination for politically-dissolute space opera.

I was a huge fan of Asimov's original novel, when aged around 13. I didn't get far with the mish-mash of sequels and prequels and I cannot see myself progressing much beyond episode two here.

They have introduced just enough random acts of violence and stunning visual set-pieces to keep one lurching forward but I cannot see it being enough. (Lee Pace, playing the median-aged member of the decanted imperial triumvirate might just get me through, just as long as he keeps turning up after minimal intervals — maintaining the Pace, so to speak. 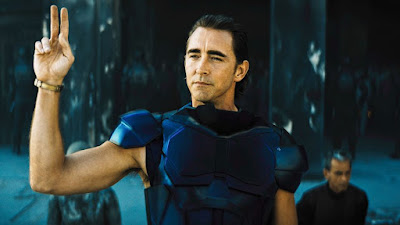 Respect and enjoy the Pace...

Hari Seldon's Pyschohistory is an idea I feel I have moved on from intellectually. And so should the wider culture since the 1950s, so it is odd to see it getting a twenty-first century reboot. (A society that is mathematically and technologically advanced yet at the same time culturally, politically...and philosophically under-developed seems like more of a cop out today.)

Asimov had read his Gibbon* and wanted to explore the idea of imperial decline on a galactic level, along with the notion that in a situation where you know you are screwed, there's stuff the aloof intellectual elite can do to ensure that things end up being maybe a bit less screwed.

So, beyond the Buck Rogers in Westeros vibe, it is the ponderously worthy theme that must have made this attractive to Apple, as many of their shows (such as The (execrable) Mosquito Coast) have a certain woke smugness baked into them from the start.

They seem fond of making series featuring avatars of wronged genius who consider themselves superior in fairly immature and annoying ways, and act like proper dummies. (See 'Genius' Bar...)

That the character of Raych Foss (named in honour of Chris?) is played by the youngish son of 'Ian', the first companion of the Doctor from 1963, seems to present a small scale mathematical challenge of its own.

In fairness, I very nearly gave up on GOT halfway through episode one.

* A brand new tome by Edward J. Watts tells the tale of Rome's supposedly 'eternal' decline and fall, a forever fountain of narratives of systemic threat and discourse on paths for renewal for any subsequent era.

Asimov was all about the science, as a writer, not so much. The word turgid comes to mind when describing his prose, on the other hand, the ideas were about as fresh and inviting as anything ever written. The guy made a small fortune writing science text books, a venue not known as extremely well paying. With Asimov, it will always be about the science.

Which is why it is not the time to regurgitate his seventy-year-old speculations, because science really has moved on since then especially with regard to its place in the wider culture.