A flawed but very saddening documentary.

As with Roadrunner, it was perhaps a bit too cagey about its rather obvious omissions. Such as the identity of the last person to see Michael Hutchence alive, Kym Wilson, the Aussie actress he would appear to have been dating at the time of his suicide in Sydney. 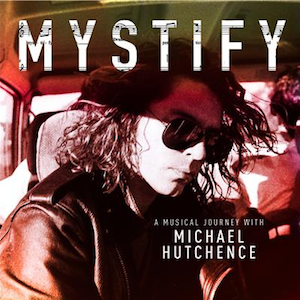 It struck us that ex-girlfriend Kyle Minogue was the only interviewee willing to open up completely, permitting the inclusion of his home videos of herself, semi-naked on the Orient Express, and unflinchingly citing his drug taking.

At the end we learn here that the coroner discovered evidence of brain damage relating to an incident in Copenhagen a few years earlier, but not that he detected alcohol, cocaine, Prozac and other prescription drugs in the dead man's organism.

In its elliptical path the film rubs up against the Hutchence family milieux on several occasions and I ended up wanting more of this. He was my senior by something like seven years, yet his parents very clearly lived within an environment similar to my own, one that is starting to be serially misrepresented within contemporary culture, because the current crop of creatives usually lack any direct personal connection to it.

Michael himself addressed the world in mild Australian English with a thespy lilt. It is easy to see why he might have ended up with a niggly complex about artistic authenticity.

There's a reminder of how he was humiliated at an awards show at the inception of the Britpop era. Noel Gallagher of Oasis accepted a gong from him with the quip that "'asbeens" should not be presenting such things to "gonna-bees".

This from the Mancunian twat who today moans to the tabloids that there aren't enough old-style rockstars around.

Earlier in the film we get a short making-of sequence in Prague...

This song at least was properly heartfelt and very authentic.

The video reminded me of my one and only trip to the Czech(oslavackian) capital in 1992. I was there in a professional capacity, tasked with completing the recruitment to our network of a small team already established in an office within a largely deserted and derelict old hospital in the city.

I don't think I was aware at the time of this journey — or indeed during another taken a little later to Warsaw — just how striking and transitory a phase in European history this would turn out to be.

Our hosts would lead me and my colleague out of their post-apocalyptic working environment and up to the Castle, which was that evening denuded of any other kind of casual visitor, something I believe unlikely to ever occur again in my lifetime.