Early on in this biography, we learn how chuffed Donald Trump was to find himself in Hanoi where there were "tremendous crowds" and "so much love". POTUS45 checked into the Hotel Metropole, where Graham Greene had once stayed, and was (of course), immediately dubbed 'the unquiet American'.

The title of Greene's novel had already, in a sense, inferred this gag. The first time it is used by Fowler, the narrator, he says he uttered it as one might 'blue lizard' or 'white elephant'. 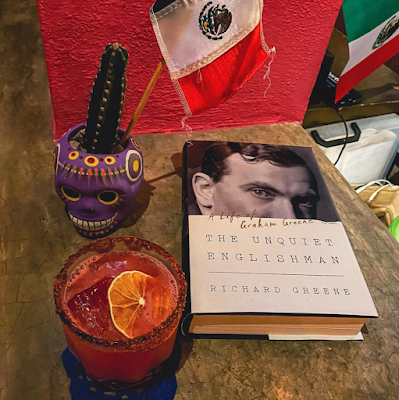 For reasons that now seem a little illogical to me, I have long held an association between Graham Greene and the city of Mérida, where the pic above was taken.
It may have something to do with the fact that this was the first substantial urban space I had visited in what we now call the developing world. I had by then made around half a dozen jaunts behind the Iron Curtain, but this felt like a novel way of being 'off the ranch'.
Mérida itself had a semi-derelict ambience it has since largely shed. I rather rudely compared the inhabitants in my journal of March '88 to "little fish swimming around inside the flooded staterooms of the Titanic."
And in the bars and cafes around the zócalo one often came across men dressed as one then imagined agents with tropical assignments might dress. Our Man in Havana. I hadn't yet read Greene's 'entertaiment', but I had an intuitive sense of the basic aesthetic.
In those days spies tended to dress like spies. Most of the KGB types I came across in the USSR tended to wear long brown leather greatcoats. The men that is. The women were invariably glamorous with fur hats and foxy, fur-lined knee-length boots.
And over here in Central America Langley men dressed like Magnum PI, in the main, occasionally accented with a pork pie hat. There were significant clusters of them in Belize, around Belmopan in particular, but Mérida appeared to have its fair share.
Some introduced themselves with unlikely-sounding titles like Operations Logistics Officer. Others were importers of "a great many things". One tended to assume that they were "engaged in one of those services so ineptly called secret", as Greene himself put it.
That men causing a degree of trouble (but for the best of reasons) might wear loud shirts and look and sound as if they belong elsewhere, is picked up in another amusing line from The Quiet American...

“I noticed that he was wearing a Hawaii shirt, even though it was comparatively restrained in colour and design. I was surprised: had he been accused of un-American activities?” 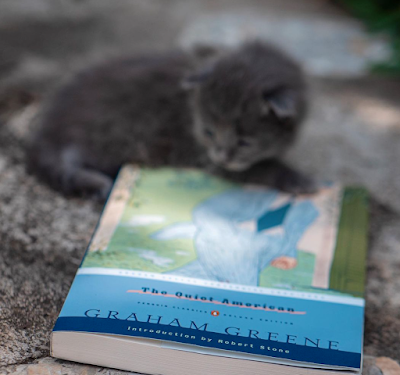 Ickle Siniy
It was The Power And The Glory that alerted me to the fact that Greene was one of the greats. Yet it is as messy, wrong-headed and flawed as it is wonderful. The Quiet American on the other hand is fractally good: every chapter, every paragraph, every sentence, every word is close to perfection in pretty much exactly the same way.
The character of Pyle has qualities which remind me of my original travelling companion in Mérida. His father was a member of the Athenaeum Club, his mother a Coca-Cola heiress, and he had secured via prospectus significant philanthropic investment in an archaeological expedition that at times seemed to present a front for all sorts of extra-curricular meddling.
He "got involved" and believed it was the right thing to do, albeit in an oddly detached and ultimately abstract way.

Was I really involved? I am not sure I was, beyond that feeling of excitement. "Was that a grenade?" Pyle asks. And I was constantly aware how others I came across emitted that same fizzle of youthful engagement, usually yet more intensely, to the extent that they appeared to have projected themselves into an imaginative space that differed markedly from the one they were actually in.

The source of all this — then as now, disturbance and struggle — appeared more appealingly picturesque than contemporary equivalents.

Yet I sometimes wonder if I am more involved now, in spite of the manner with which the superficial thrill has waned.

Fowler was in little doubt...

“One forgets so quickly one’s own youth: once I was interested myself in what for want of a better term they call news. But grenades had staled on me; they were something listed on the back page of the local paper...

“You know, if you live in a place for long you cease to read about it.”