Produced by Jordan Peele and directed by rising star Nia DaCosta, this update on the 1992 original is generally successful and welcome. 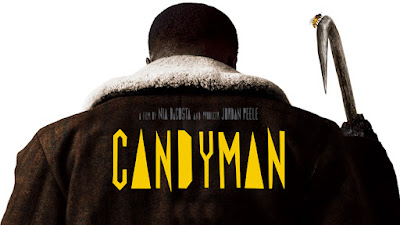 Visually-arresting woke horror is now a thing, as we have just seen with Last Night In Soho — in which victims of historical pain and injustice are seen to be getting perhaps a bit too angry in that rather slashy manner.

Here, as there, it works to a point, though this film is trying to be a bit more sophisticated in the way the superficially genteel present day (gentrified, in fact) interacts with the more obviously unreconstructed past.

DaCosta's Candyman is always great to look at, featuring some superb set piece hookings, and develops the mythology regardfully, but at times I felt that the dialogue, character-building and storytelling was of a less meticulous nature.

It's not always clear what the satirical barbs are specifically targeting. The white people in the art world are insufferable, but then so too are some of the black people. There are two gay characters — one black and one white, the black one played by a non-American, non-gay actor — that for me came perilously close to caricature, or worse, an unfunny joke.

The lead character, Anthony, has one moment of comparative non-dullness — when he appears to be secretly pleased with the publicity afforded him by a double murder. But that's about it really. His gallerist girlfriend Brianna has a backstory of dubious relevance and only really becomes sympathetic late on in proceedings.

There are one or two elements of the production which may have been deliberately set up as cultural booby-traps. Mentioning them would be close enough to the digital equivalent of naming him five times into the mirror.

(But for covid, the film would have been released at the peak of the Black Lives Matter protests in 2020, but any discussion around it probably benefits from the minor delay.)

Posted by Inner Diablog at 9:35 pm