From the jungles of Argentina* to the fabulous lost eggs of Cleopatra...to the sudden detention of Ed Sheeran, this is a movie that is silly and contrived and wants you to know it, for that is part of its core entertainment value.

If silliness offends you, this is possibly not for you. And if you don't get this throwaway line from Ryan Reynolds, you'll surely be excluded from some of the pleasingly self-referential irony going down here.

However, if you are content to be banqueted somewhat vulgarly by a movie that has been fabricated to provide a playground for its three megastars and a screenplay that does little else than provide each with opportunities to serve up their signature shtick, amidst a backdrop of visual and audible tropes you can practically tick off, then Netflix might have come up with a winning, and very repeatable formula here.

We are surrounded by studio franchises competing to take themselves oh so seriously, serving us up with relentlessly on brand narrative material. This is just 'look, we've hired Gal Gadot, The Rock and Ryan Reynolds and set them loose on a bit of — knowing — fluff', and that is somehow so refreshing. (Reynolds is the stand-out as he successfully holds together the ridiculous and the competent in his character.) 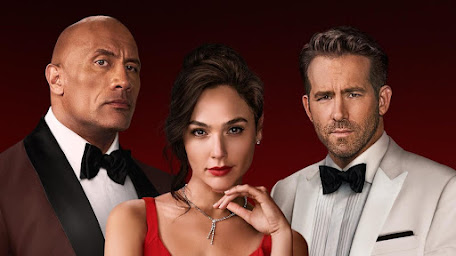 Having just watched Daniel Craig's final outing as Bond, I did find myself wishing that No Time To Die had been just a bit less po-faced.

* Bearing a resemblance to that part of the IKEA experience where one has little else to do other than pick up a nice potted palm.

Posted by Inner Diablog at 9:36 pm