At the end of the credits there came the familiar James Bond Will Return.

I have heard some people in cinemas have applauded this gesture towards the undying/undead nature of the franchise, but for me it was all a bit meh. I went to bed in a mood of gathering gloom, that continued to gather through six hours of sleep and into the early morning.

I was anyway never entirely on board with the Craig incarnation of 007. Either he or the soap opera that steadily congealed around him was always a bit annoying, but the mood of gloom is being fed by the realisation that, now he's gone, whatever comes next will almost inevitably be a lot MORE annoying.*

This film ticked some of the Bond boxes pretty well, others rather less so. (There was quite a lot of box ticking overall.)

Norway, Italy and Scotland were used to particularly good effect.

There was a punt-guide's apocryphal story at Cambridge about the Mathematical Bridge at Queen's — that it had been put up without the use of nails by Newton yet later a committee of the curious a took it apart to see how it was done and then failed to put it back properly...and so out came the nails. This I felt what happened to both story and dialogue here. 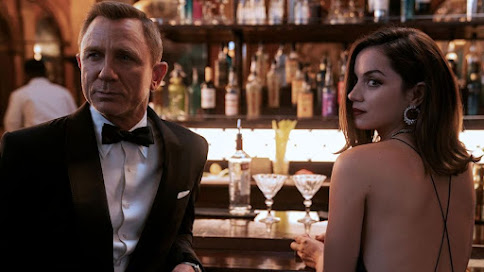 No time to edit? (Actually, they had more than enough.)

I also felt that fast yet jerky rush to tie up loose ends and deliver the necessary conclusion that spoiled the last few episodes of Game of Thrones and Dexter.

Did we really need this emotional arc? Craig's quintet of movies never quite lived up to the promise of Casino Royale and here I resented having to try and remember the very forgetable Spectre for the first half hour or so. (How many years ago was that? I'd lost most of it in the first month.)
If I want long-form continuity I will box-set binge.
There's an antagonist who seems kind of important who ends up effectively dying in a car crash, and then there is the CGI...hairless cat.

And that whole sequence supposedly set in Santiago de Cuba was frankly embarrassing, so bad that it I never quite got over it during the subsequent action. Ana de Armas, whose career was (deservedly) on the up when she shot it, must have hoped that the pandemic might end up burying it permanently.

Those scenes were all so televisual. Even The Squid Game did a better job of lowlife highlife and the bar was set pretty low there.

James Bond has gone so far towards becoming Doctor Who with guns, that I almost expected Craig to keel over and regenerate at the end...

* For what it's worth my own bet is that they will go retro.