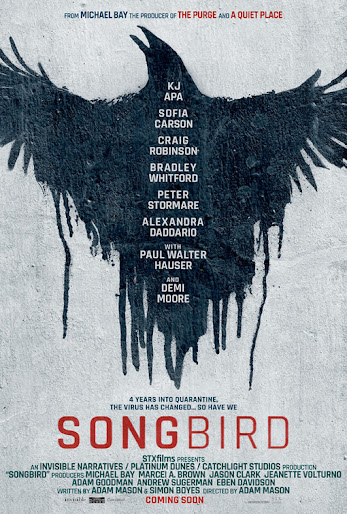 Michael Bay produced Songbird and his dimwitted drool is all over it.
Whereas the latest (7th) addition to the Parasnoremal Activity pile has been consciously set during the pandemic and features people in masks, in Songbird — hailed as the first covid 'thriller' — and which takes us three years into the future when a more deadly version — 56% fatality rate — of the virus, covid-23, has occasioned 'the fall', there is not a single N95 surgical mask on display.
Other than its unremitting dumbness, there are a few things to note.
It features Demi Moore, here playing the embittered wife of a record company power player. (There's a bit of a nudge nudge towards her roving eye for a dishy younger bloke, though this one does take showers.)
Also appearing is Elpidia Carillo, fondly remembered from both Salvador and Predator ("gimme da huepan!") as, somewhat alarmingly, Lita (abue...), the only person we see actually croaking from covid in the movie, and in such a placid, non-gurgly way that makes you wonder what all the fuss is about.
And this was an extremely bad career move by Alexandra Daddario, here cast as someone who has made a series of very bad career moves — a relatively minor character that is possibly the titular one.
Bay possibly thought a cash-in project set during pandemic ++ would be a no brainer, but then he paid a couple of no brainers to build this world and the 'thriller' plot.
The basic situation is that the healthy and wealthy live in sealed lockdown, scanning themselves every day with an app for signs of infection. Those that fail are carted off to a Q-Zone, an altogether grungier kind of quarantine behind high walls.
Some people have natural immunity, and yellow 'access all areas' wristbands to prove it, but rather than doing the job of the men in hazmat suits, they whizz around empty streets as bicycle couriers delivering stuff to the rich.
None of it makes much sense, but the movie isn't really interested in the scenario other than as a gimmick which provides a set of obstacles for a cutesy love story and there are times when that alone keeps Songbird just on the entertaining side of incoherent.
Paranormal Activity: Next of Kin may well have started out as a stand-alone  screenplay treatment. In finished form it is an odd amalgam of three basic tropes: your bog standard demonic possession horror, a sort of Midsommaaaar clone, and then the franchise's signature night vision spookerama; Big Brother with angry spirits.
Adoptee Margot from Phoenix discovers that her blood relatives are from Amish country. She sets off with a male cameraman friend to meet them and make a documentary, picking up a goofy sound guy along the way.
And it is in its found footage structural pretensions that the film is weakest, for you have to believe that at no point would they hastily abandon the project, and there is one particular supernatural stalker in the bedroom scene which feels as it has been bolted on just so the narrative stays on brand, even as it sheds sense. 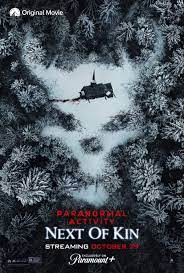 Posted by Inner Diablog at 4:11 am