The only review I read before we watched this one went something like this: a thrillingly dark and of the moment small town, high school drama which satirises the acquisition of credentials for a 'prestige' American education and then switches destination after a surprising and not-unnerving swerve at the end of the penultimate act, and ultimately doesn't quite land as intended. 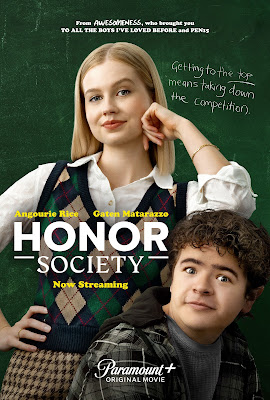 This is more or less the opposite of our own experience. In the first hour all I could do was name-check the superior titles from the canon apparently being referenced — Clueless, Election, American Pyscho — and the small screen's Fleabag too, but then the quality gap started to shrink noticeably and we found the landing both competent and even quite uplifting in its residual darkness.

Whereas I'd been thinking that Angourice Rice was being mis or perhaps over-used in the first period — to her own detriment  — this movie ended up looking like a significant platform for greater things. (Though one recalls that the leads of the above-mentioned films were never really any better afterwards.)

She was very good as Mare's daughter in Easttown and as V had only recently tuned into the hotness of Ryan Gosling and insisted on  full retrospective, we recently found a younger version of Rice showing considerable promise in The Nice Guys (2016).

Posted by Inner Diablog at 8:12 pm