House of The Dragon (HBO) — episode one

I cannot recall in which order Shakespeare's history plays were released, but let's assume that there was an underlying sequel/prequel/reboot logic to it all. And that different quantities of money might have been splurged on different parts of different Kings. 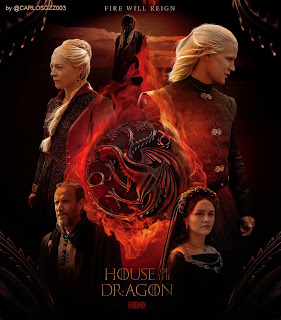 On various levels House of the Dragon possibly harks to a play the Bard never wrote: Young Lear.

Anyway, the trick with the telling of history, even ersatz history, is to get us to care about every chunk of it in its own terms, regardless of what we know about what happened later.

Few Englishmen fail to be roused by the antics of possibly our greatest ever monarch — Prince Hal/Henry V — even though we know how his project stalled with his untimely death and how his son, possibly our worst ever monarch, assumed the mantle.

This first episode of Thrones 2, derived from George R.R. Martin's novel Fire & Blood, deserves a mixed report. At the beginning it feels like watching a tribute act (with some Woke accretions) but then the joust and the ill-fated labours commence. We feel that budget turbo.

If the makers understand, unlike their predecessors, that the tournament was a twisted microcosm of actual medieval battle c1400, then the extra monies could result in great things. It's a shame though that many of the Sers, Daemon in particular, appear to be wearing plastic armour of the sort I donned as a child.

The Targaryen duty of dynastic whispers did come over as a little like Henry IV warning Hal of Bosworth field, or perhaps even of the schism with Rome.

How strange that after arriving on the scene as the ultimate goody, Matt Smith has seemingly since been type-cast as a sociopath.

Oh, how I long to binge. A friend suggested that all I need to do is wait for the season to conclude.With S4 of Westworld I found myself bingeing until I caught up and then frustratingly stuck back in the weekly cycle.

Posted by Inner Diablog at 9:05 pm