At around the midpoint, when my mind was still reeling from all the aspects of plot and character that made no sense at all* the poignant figure of Iceman Kilmer typed "Let it go..." on his appropriately 80s home PC setup, and I did.

In spite of all the pickable nits, perhaps even because of them, this movie is close to perfect. 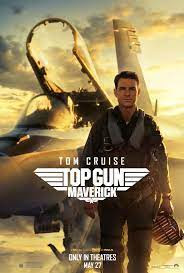 While it riffs on some of its precursor's most famous tropes, notably the cheesy dialogue and homoeroticism*, Joseph Kosinki takes things down a notch or two from his own predecessor Tony Scott's relative clumsiness in these regards.

For the record, Maverick's jacket always had the flag of Taiwan on the back. All that has changed is that 36 years later China is in a position to throw a bigger hissy fit over it. 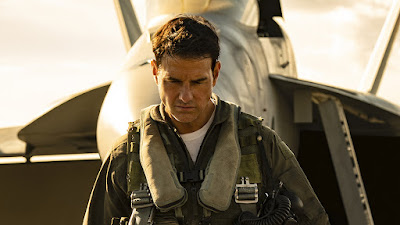 I experienced the original within a raucous posse of my peers in the Cambridge Arts Cinema in 1986. I have a feeling I had already seen it at least once at the time, but couldn't swear to it; but anyway, that particular viewing was immensely more immersive.
I now wonder if a fabulous piece of entertainment such as this would ever been green-lighted were it not for our collective nostalgia for the expansive mood of the 'prequel' and the longevity of Tom's A-listedness. There will surely always be a market for premium, escapist, silliness, but perhaps we are running out of the stars to front it up.
Although we have a projector at home, I now regret having passed up the chance to see this flick in Campeche a couple of months ago, but it was my last night there and I was feeling listless, so I literally rain-checked.

* That Jennifer Connelly was shooting Labyrinth when Tom Cruise started training on F-14s somehow felt a bit euuuuuuuu. Yet, as with everything here, she significantly exceeded Kelly McGillis as competent woman with nice car. Yacht too. Maybe I should open a bar in San Diego.

* Arguably the 'gayest' bits of this film occur when Tom and Rooster share a superannuated fighter for one last dogfight towards the end, and then beyond that, back on the carrier.

Posted by Inner Diablog at 8:51 pm