Last Summer In the City by Gianfranco Calligarich

Warm brioche at dawn is about as close as this cult novel gets to 'feel good'. And there's not a Vespa in sight.

A croissant from San Martín an adequate surrogate here... 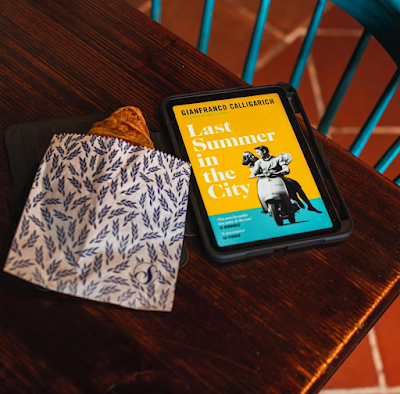 It offers an account of a year in the Italian capital from Leo Gazzara, a just-turned-30, would-be journalist nibbling around the crusts of more established and glamorous Roman lifestyles.

Since its publication in 1973, it has struggled to find a lasting mass take-up beyond the literati. There are several reasons one could suggest for this, not least the fact that it ultimately reads rather like an extended suicide note.

The novel was published at a moment of transition between Italy's 60s boom and the anni di piombo of the following decade and has tended to vanish and then reappear whenever its abrasive characters have seemed more befitting to the moment. This English translation has been released at a time when we refer to this age-group and its traits as Millennial.

English readers are tempted with blurb noting comparisons to The Catcher in the Rye, Fellini's La Dolce Vita and occasionally also The Sun Also Rises.

While Hemingway's avatars are lost because of the war, Houellebecq's because their parents were hippies, for or Leo and his friends, feeling this way is almost a side-effect of life in the Eternal City.

Leo is an impecunious outsider, yet Rome has seemingly offered him an infusion of virtual blue blood; a loaned sensed of self-worth loaded with a painful malaise — a nostalgia for things one never really had, resulting in the sense of being an avanzo, a remnant, leading a life consisting of leftovers.

He exemplifies an Italian type: the sfigato, here a person dangerously detached, drifting along the edge of an existential precipice.

It's not hard to see why the novel has been cherished by intellectuals. Leo is a witty and perceptive observer of his environment. A little less so however of the people around him, to the extent that many readers may fail to care all that much.

Hemingway's posse in the Basque Country are also unlikeable, but the first time I read Jake's narrative I shared his obsession with Lady Brett in a manner that was unrepeated here with Arianna. Leo informs us of her beauty, but his broader descriptions render her rather irritating.