Multiple universes exist in order to give us the sense that we have a sensible explanation, when in fact, we don't. 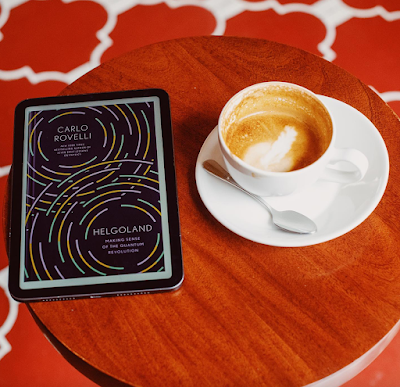 I never thought I'd hear myself saying that, but Carlo Rovelli has successfully undermined my two decades-long 'faith' in this approach to quantum 'interference'*, and inside the pages of Helgoland I have witnessed Occam's Razor being used to splice up the Multiverse, mysteriously, into one piece.

I'm presently immersed in the second half of this profound little book, where the author turns to entanglement, clearly neither the end result of signals travelling faster than we can currently allow, or some sort of prior agreement. Rovelli suggests, in a way I am yet to fully digest, that any correlation between two apparently distinct objects exists only in relation to a third.

I have always loved the way that he implies more than he actually says, but once he deploys the term 'information' he becomes guilty of a sin many theoreticians in his field apparently succumb to.

What he says is that the notorious cat is only dead or alive (in fact sleeping, as he compassionately tempers the metaphor) from its own POV. What he implies is that the properties of all matter are relative and so an isolated object not interacting with anything else (as opposed to the complex system we know all cats to be) has no reality per se. Everything perceivable is part of a web of interactions.

I have long been fond of saying that there is no such thing as nothing, but Rovelli reveals that a thing on its own is no thing at all.

Rovelli is a master of metaphor — not just the stand-alone clever comparison sort, but the kind which connects an idea to a useful network of concepts. Beyond his obvious cultural repleteness, it is surely this what makes him the most interesting (and useful) contemporary science writer for specialists well beyond the frontiers of his own expertise.

I suspect that I will have more to say here later about this "radical interdependence of things”.

* Imprinted on my mind after a reading of David Deutsch's The Fabric of Reality had pushed the notion that parallel realities are a necessary consequence of our observations of the uncanny behaviour of photons.

Posted by Inner Diablog at 1:32 am