Practically everyone has been raving about Mick Herron's Slough House series since Slow Horses was first published a decade ago.

In a recent edition of the New Statesman John Gray went to far as to suggest that Herron is a superior writer to the late John Le Carré. (Hmmm...)

Mick Jagger is reportedly such a big fan that he absolutely insisted on doing the vocals for the customised theme song. Like everything on Apple's first 6-part adaptation, it's kind of wonderful...

I read the book two or three years ago and really enjoyed it, but somehow didn't feel the immediate need to press on with these characters. Yet now I have enjoyed the show considerably more and have been trying to pinpoint precisely why.

Actually seeing areas of London I know so well counts for something, especially when given this kind of atmospheric overlay. 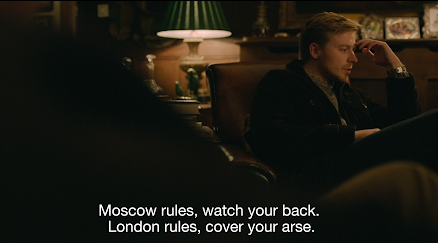 But in the end, perhaps it all comes down to Gary Oldman. There's humour in the books, but his take on Lamb is utterly hilarious and on-the-nose. A well written gag still requires delivery, and maybe I hadn't been delivering them all that well inside my head. And Oldman is the standout example of near perfect casting across the board.

Given the way that Killing Eve became a sort of self-satire, where the writers lost all track of the bigger stakes, this is a welcome addition to the small screen genre. And Ho is surely the best pissing from inside out dweeb yet incorporated in this kind of series. And he reminds me of several colleagues from the 90s. I'm now into Dead Lions, applying the TV makeover in my head. We only have until November before Oldman and co return with their own delivery.

Posted by Inner Diablog at 7:22 pm

On 22 July 2022 Mick Herron’s sardonic spy thriller series called Slough House deservedly won him the Theakston Old Peculier crime novel of the year award. If Jackson Lamb had won it he'd have had a huge hangover this morning but let's not dwell on what that might have sounded or smelt like. Both Mick Herron's Slough House series and the Burlington Files series of espionage thrillers by Bill Fairclough were initially rejected by risk averse publishers who probably didn't think espionage existed unless it was fictional and created by Ian Fleming or David Cornwell. It is therefore a genuine pleasure to see an anti-Bond anti-establishment novelist achieving immortality in Masham. Let’s hope Beyond Enkription, the first stand-alone fact based spy thriller in The Burlington Files series, follow in the Slow Horses’ hoof prints!