And on the seventh day...

Data released by the CDC in the past few days seems to suggests that amongst so-called 'breakthrough' cases — double-jabbed individuals who subsequently show up as covid-positive with the Delta variant — the initial viral load is broadly similar to that detected in the un-vaccinated, though this drops off sharply after six days. 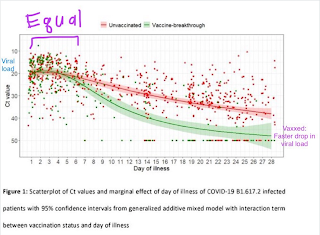 This would suggest that although the vaccinated are at less risk of hospitalisation and death, they remain, under certain circumstances, a risk to others.

Tokyo has seen a surge in covid cases which may turn out to be at least partly Olympics-related. Yesterday the city reported 3058 new cases and the infection rate in the Japanese capital now stands at 88 people per 100,000.

I have taken a pop here before at the Japanese for vaccinating only a third of their population prior to the Olympics, but have felt greater exasperation regarding the substantial number of US athletes who showed up unvaccinated. (It would be easy to forgive the locals for regarding this as near-criminal behaviour.)

The irresponsible attitudes uncovered by this survey in June are truly astonishing... 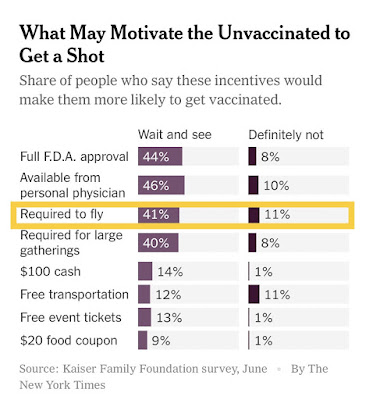 Australia, population c25 million, is reporting fewer than 200 new cases daily and has a similar number in hospital at any one time, yet major urban areas have been under strict lockdown recently, and Sydney looks set to remain so until at least the end of the month.

Like the Japanese, the Aussies have defaulted to insular self-protection over rapid vaccination, a situation exacerbated by an apparent inability to make up their minds about the safety of the Astra-Zeneca shots. 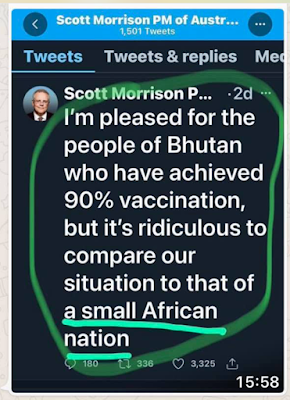 They have also seemed to be inhibited — in a manner somewhat familiar from the UK — by a donkey-in-chief and a federation structure where healthcare decision-making has been devolved to the component parts. And then there's the fact that quarantine hotels are a bit like beached cruise liners.

Meanwhile, in the past week Canada has swept past Israel and the UK into Gold medal position in the vaccination Olympics. And they were well behind for most of the race.

Posted by Inner Diablog at 7:14 pm