The major US stock indices are currently worried about tapering, of two rather distinct kinds... 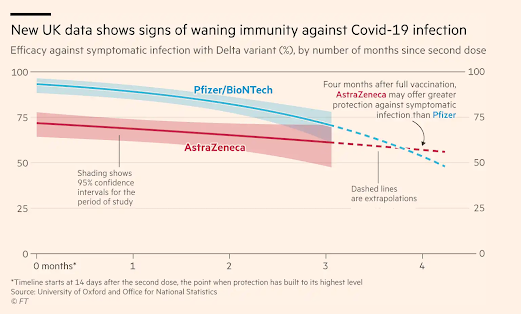 A major study which looked at 700,000 cases has found that half of fully-vaccinated people infected with Delta will develop symptoms of some sort. (With Alpha the equivalent figure was 10%.) The good news is that vaccines appear to reduce the chance of infection by just over half, though both time and the Delta variant appear to be eating into that protection too.
Anecdotally I can recount the recent case of a close friend who became infected the day before he was due to receive the second dose of AZ. He reported no symptoms and emerged from quarantine today. (I had a worse time from the vaccination itself!)
Astra-Zeneca does seem to provide better protection from even just the initial dose, something which is also claimed by the makers of Sputnik V, if we are to believe them. As for AZ's longer-lasting immunity, Tomas Hanke, prof of vaccine immunology at the Jenner Institute, Oxford has this to say...
"When you deliver RNA, like the Pfizer vaccine, you deliver a finite number of mRNA molecules which are eventually cleared from the system,” he said. “But when you deliver the adenovirus, as AstraZeneca does, you deliver a template which then keeps producing these mRNAs that then produce the spike protein, so there’s no ceiling."
This molecule-clearing process appears to take a bit longer with Moderna's vaccine which contains three times as many of them as Pfizer's.
Aside from the calculations affecting each of us as individuals, the tapering effect should be important for policy-makers too — particularly, I would suggest, in nations like Guatemala which are going to take many (many...) months to vaccinate more than half of their populations.

If the mRNA jabs lose effectiveness fast (and remember they are more expensive and logistically cumbersome) the prospect is duly raised of chasing our tails, as protection wears off for the first groups to be vaccinated, substantially before any sort of stable herd immunity can be achieved by widening the programme.

The relative durability in the case of Astra-Zeneca may be one reason that the UK has had some success in restoring a degree of normality this summer, though luck may also have had a part in this as in temperate zones the pandemic appears to have some seasonal patterns.

And although we have our fair share of dunderheads in Britain, they would appear to be less densely clustered than in the US... 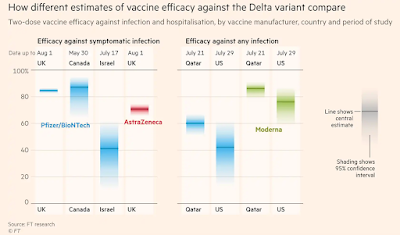 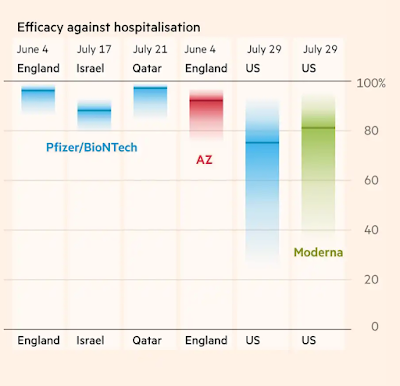 Posted by Inner Diablog at 2:55 pm