Stillwater is trying to be both a French movie and an American movie at the same time and the result, inevitably, is a bizarre but occasionally endearing muddle. 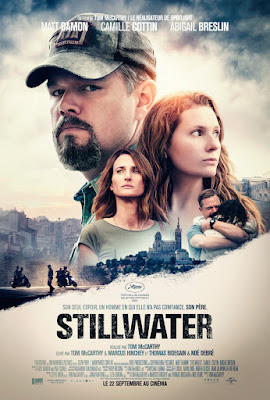 Imagine Taken had starred Damon instead of Neeson, with the thriller elements dissolving into a study of the psychological inadequacies of an iconic kind of American in Europe.

Director Tom McCarthy has offered a partial explanation for how this came about. He started off trying to fashion a screenplay based more explicitly on the Meredith Kirschner murder case and along the way found himself diverted into this tale of an all-American male who becomes a fish out of water in Marseille in order, ultimately, to become a fish out of water back home in Oklahoma.

And in that he can perhaps be forgiven, for the only really interesting part of events in Perugia from 2007 onwards was the manner with which the case was investigated, not the follow-up.

The attempt to mix oil and water is nowhere more apparent than in the slow-burn relationship between Bill, Damon's latently violent 'fuck-up' of a God-bothering, one cap roughneck and his host, bohemian thesp Virginie, played by Camille Cotton. The actress starts off appropriately rude and French and then turns increasingly saintly. And we soon know that romance is permitted, as Bill got off voting for Trump on a technicality.

There are one or two plot points you could have written down on your bingo card at the outset. And one, about a suicide attempt, that is a forlorn orphan within the story.

Overall, it sort of works and it sort of doesn't. The scaffolding from "true events" is rather awkwardly still visibly attached.

Hard to tell if Amanda Knox would have been even crosser had it been just a tad more coherent and suspenseful, and thus more about her analogue Allison.

Posted by Inner Diablog at 6:48 pm