Roadrunner, a film about Anthony Bourdain (2021) 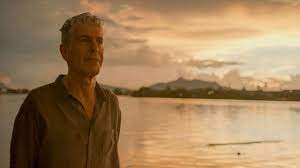 Many countries have one of these, the A-list adventure traveller, through whom viewers get to experience some of the trickier parts of the world vicariously.

These individuals are often enough perfect specimens of their homeland. We have Michael Palin and Simon Reeve, two individuals so classically British it's almost excruciating. And then there was Anthony Bourdain, at once the bad boy and the ingenu.

Like the man himself, this post-mortem is both fascinating and a little frustrating. There are substantial and obvious gaps. The fall-out that led to him switching to CNN, the second fatherhood with Asia Argento.

The film is made up of takes and out-takes from the shows plus interviews with his personal and professional circle, in the main middlingly successful creative types in whose lives Bourdain must have been like a big bright sun, and there are parts where the focus seems to be primarily on their bemused sense of loss and their inability at times to speak openly about some of the key moments without resorting to innuendo.

Very little effort is made here to step back from this privileged circle and offer something more akin to an independent assessment of Bourdain's life and work. The apparent intimacy of the documentary is more than a little spurious as there is almost no exploration of the existence he was leading when not being followed by a cameraman.

I love travelling, but I cannot imagine being on the road 250 days out of every year for over a decade. Perhaps the most interesting revelation is that Bourdain had hardly travelled at all before the publication of his first book when he was already in his mid-forties. (I have visited more new countries since turning 40 than prior, but these are possibly not the most important journeys I’ve made.)

Both the writing and the travelling were things he was in a sense incited to do by others and so he was perhaps emotionally unprepared for these late vocations, which appeared to become both a mechanism for releasing himself from his demons and for running into unexpected new ones.

And all the while manifesting, in public at least, as a kind of silver-haired, awkwardly tall and nerdy adolescent.

Posted by Inner Diablog at 6:50 pm

The tale was spun in such a way that Bourdain seemed to be participating in his own obituary. I really enjoyed it, anyway. I still happily watch old repeats.

Yes, I now know they did show the ladt season posthumously.

That one in Hong Kong did seem a bit off - and pretentious- to us. They were unspecific about how Asia screwed with the process.