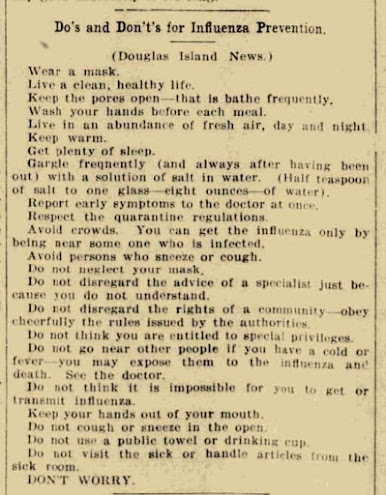 Some counsel from a newspaper during the Spanish Flu pandemic of 1918. "Do not discard the advice of a specialist just because you do not understand" remains as pertinent as ever.

The concluding item would probably be handy for anyone who sat through the press conference at the Palacio Nacional in Guatemala yesterday.

In short, we are as near to calamity as it is possible to be without things being entirely calamitous. ICU spots at 95% occupancy; case numbers beyond 400 a day, around 60% of these the result of non-critical social interactions.

The best way to spin the current Guatemalan numbers would be this: out of every ten individuals across all age groups that become infected, nine won't need to go off in search of a hospital bed.

Of those that do find one, 70% won't subsequently die, an improvement on the 40% equivalent from the early stages of the covid pandemic last year. 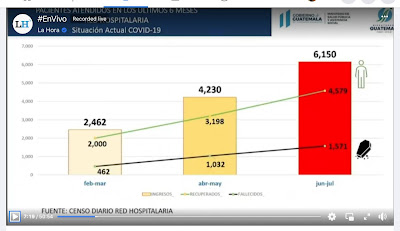 In the absence of formal restrictions, the key advice was for Guatemalans to understand the need to desist from all activity which doesn't relate to a 'reasonable' economic benefit i.e. putting food on the table.

And there followed the now notorious appeal to common sense, even less likely to register here than it did in England.

Us Brits do however seem to be collectively exploring the joys of introversion to an unprecedented extent, at least according to the latest data from Sage...

I'd been wondering if, instead of the somewhat arbitrary controls we have seen up to now (restrictions on when one can do things like buy a beer or go for a walk), something akin to the 'rule of six' would work in Guatemala — in other words, an explicit limit on the magnitude of social contacts.

In practice Chapines would probably end up having reuniones of five or fewer members of family or friendship circles, and more times in the week simply in order to compensate.

This week we have started to see worrying surges in case numbers in countries formerly congratulated on the speed and scope of their vaccination programmes, most notably Israel and, on this side of the pond, Uruguay and Chile. (Though the use of Sinovac in the latter may have something to do with this, as it is not believed to be that effective against Delta.)

Posted by Inner Diablog at 6:07 pm