Films about the dying can be awfully mawkish, often more deserving of the category Exploitation Movie than those with a far more substantial body count. 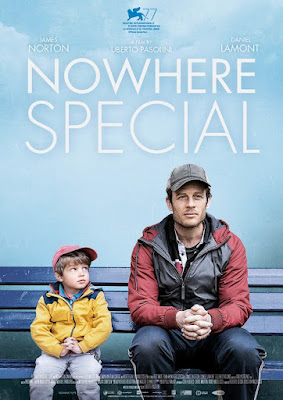 This take on the topic, which follows a father suffering from terminal illness in his quest to find a permanent new home for his young son Michael is both subtle and humane.

The peculiar circumstances of 2020 seem to have resulted in a number of fairly high profile actors taking on quieter roles. Norton is superb here in this European co-production, successfully smothering almost all of the psychotic public schoolboy vibe that he more commonly exhales. He's very much at the warmer end of calculating here.

The subject matter ends up being the least depressing thing about Uberto Pasolini's movie. Instead, most of the truly downbeat notes emanate from the Ulster locations, rather aptly described by the title.

Posted by Inner Diablog at 4:42 pm

When Linda and I were young, we were chosen to care for a number of children, should both their parents die. All those children are grown now, the contracts void. We were not very wealthy or even very religious but I think those relatives and friends liked our parenting style. To be asked is an honor for any parent. In for a penny, in for a pound.

Indeed. Thanks for that.